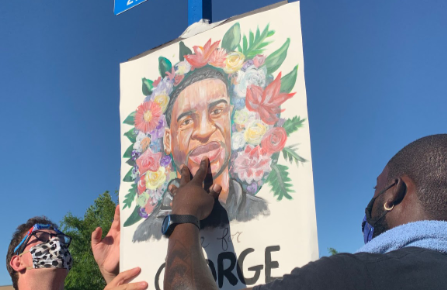 At the end of May, protests erupted across the United States and the world in response to the deaths of George Floyd and Breonna Taylor at the hands of police. The protests centered around police brutality and the lack of immediate discipline for the police officers that killed the two unarmed victims.

Kansas Citians were strongly involved in the protests as well. Demonstrations occurred across the city and involved people from a range of backgrounds and social status. During the first week of protests, there were several protesters tear gassed, sprayed with mace, shot with rubber bullets and arrested by KCPD. At several of the protests military personnel were brought in as backup for law enforcement.

Demonstrations occurred at the KCPD headquarters, the Jackson County courthouse and on the front steps of city hall. Protestors made demands for change to several of the policies within the Kansas City, Missouri police system.

The demands included a local review board of the KCMO police department, local control of the department (which is under the auspices of the state government), and body cameras for all officers. These demands were made in part due to the death of Breonna Taylor, the African-American woman who was killed on March 13 while sleeping in her Louisville home by police officers that had forcefully entered the wrong house.

At the beginning of June, while the protests were still being organized, police and city officials made the announcement that they would be outfitting officers with body cameras, but there hasn’t been much word on when this will be set in place.

On June 4, Mayor Quinton Lucas announced several changes that will be set in place with KCPD, including how the KCPD holds internal investigations, creating protective services for whistleblowers in the department and developing processes for outside agencies to investigate use-of-force complaints and officer-involved shootings. These outside investigative agencies include the Jackson County prosecutor’s office, the Federal Bureau of Investigation, the U.S. Attorney’s office and the Missouri Highway Patrol.

Mayor Lucas said, “Accountability is always important for 21st century policing. It will be important in Kansas City.”

Lucas also pardoned those charged with nonviolent offenses due to the protests, such as stepping off the sidewalks or being in the streets, as well as non-compliances of police orders.

“This moment is not about individual protests on the Plaza or in Kansas City,” Lucas said. “But, instead, how we can build trust between police and our communities, and frankly, how we can help solve many of the challenges we have in Kansas City’s violent crime.”

Police Chief Rick Smith was ordered, following the extreme measures used against protestors, to examine how the situation could have been handled differently and how it could be handled in the future.

In a survey sent out to police departments in America’s 100 largest cities, results indicated 40 police forces have made at least one change to their use of force policy in response to the national protests. According to the Kansas City Star, the KCPD is the only one among the 100 reviewed that did not meet any of the five criteria put forth by the nonprofit Campaign Zero. The criteria involved the reporting of use of force and shooting at moving vehicles, the application of all manner of neck restraints, the issuance of warnings before officers resort to deadly force and the exhaustion of all other options before using deadly force.

Changes are not just being made in Kansas City. At the end of June, the House approved a police reform bill that had been proposed by the Democrats earlier that month. The bill includes reforms to make it easier to prosecute police officers for misconduct in civil court and increase transparency within police departments.