The president who cried COVID 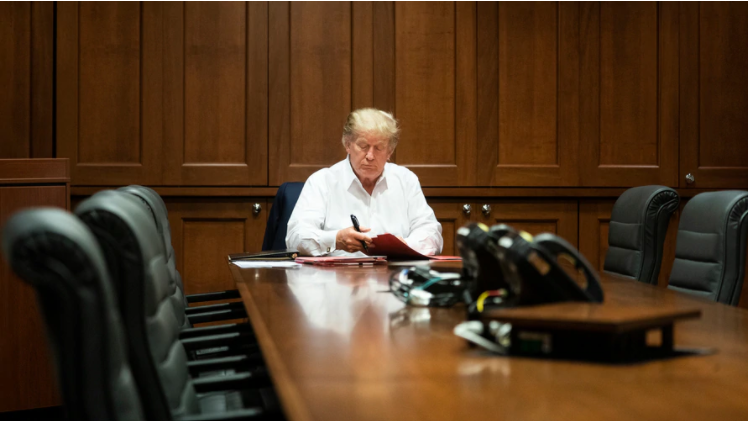 I woke up around 2 a.m. on Friday, Oct. 2, and instinctively unlocked my phone. I had a notification for a group chat with some friends, and I opened it. In the middle of the night, about two hours after the news had dropped, I found out that Donald Trump, the mask-resistant, trigger-happy country opener and current president of the United States had tested positive for COVID-19. In the way of 2020, the world and all its context shifted slightly, again.

Trump has frequently and publicly exhibited an apathy towards the country in regards to COVID-19. As recently as Tuesday, he berated presidential opponent Joe Biden’s mask-wearing habits, saying, “Every time you see him, he’s got a mask.” This statement, paired with tons of photos from various campaign events, put together a picture of his ridicule of effective COVID-19 precautions and how he made himself susceptible to the disease.

Of course, after looking at the groupchat and finding a New York Times article which confirmed Trump had tested positive, I turned to Twitter. Scrolling through my feed, I could tell which tweets had been from an hour or so before the news dropped, and which tweets were from the exact moment the author of the tweet found out. Every tweet with a grayed out “2h” next to the handle was an exclamation, usually about two words, conveying nothing but the strange feeling of finding out the president had contracted a disease you’d thought he would catch months ago.

Then there were the after tweets, the tweets where the author’s opinion sneaked out.

There were many tweets that, right out of the gate, expressed disbelief that Trump had actually contracted COVID-19 and thought he was faking to get out of future debates or to garner sympathy votes. Some people believed that he was faking it in order to make a quick recovery, thereby proving that COVID-19 is “no big deal.”

In response to the doubt around the president’s diagnosis, author and comedian Akilah Hughes tweeted, “Imagine lying so much that when you get sick in a pandemic where that was always likely people just don’t believe you.” She had a great point. Trump has lied so much throughout his presidency so far, and ridiculed the COVID-19 pandemic so much, that when the news actually broke, it was like the story of the boy who cried wolf.

In fact, as of July 9, 2020, according to the Washington Post fact checker, Trump has made at least 20,000 false claims. As I wrote this piece, out of 862 Trump statements fact checked by politifact.com, 449 of those claims were “false” or “pants on fire,” and 176 were “mostly false.” This means that, of the statements checked by PolitiFact, 72.5% were false in some way.

However, I don’t believe that Trump is lying about testing positive for COVID-19. As we have witnessed throughout his 2016 election campaign and his presidential term, Trump dislikes being perceived as weak. By getting COVID-19, no matter whether he recovers or not, Trump portrays himself as susceptible to the pandemic.

While some people believe that he is lying in order to portray a quick and easy recovery to the country, therefore downplaying the seriousness of the disease, I find that to be a convoluted way to make that point. Simply not contracting COVID-19 would be a more effective way to display the pandemic as frivolous, especially as Trump journeys to different rallies and events while not practicing pandemic safety measures.

We have no reason to believe that Trump is lying, especially in this case, because he has not been practicing proper pandemic safety measures. We have seen, over months and months, Trump refuse to wear a mask or suspend campaign events involving large crowds. In June, Trump held a rally in a 19,000 seat auditorium in Tulsa, Oklahoma. While 19,000 people did not attend, due to TikTokers reserving seats under false pretenses or otherwise, the intention was surely to have most of the auditorium occupied. As recently as last week on Sept. 26, Trump hosted a super-spreader event in his haste to officially nominate Judge Amy Coney Barrett to the Supreme Court.

As Hugo award nominated author Chuck Tingle tweeted, if your friend said they spent all day in crowded convention centers, played golf with friends, shook hands without a mask on and their assistant had COVID-19, would you assume that the cough they came down with was just allergies? No, you would think it was COVID-19. (I have paraphrased here because, while I love it, Chuck Tingle tweets in his own special dialogue that untrained minds might have trouble reading.) I completely agree with him here. If we believe in the science we have been promoting for months, it should be no problem to wrap our minds around Trump contracting the disease. In fact, I was surprised he hadn’t come down with it months ago, which I discussed with a friend just weeks before when Governor Parson was diagnosed publicly with COVID-19.

While I am positive that Trump is not faking his positive COVID-19 diagnosis, it has taken the public’s eyes off of particular things he has done over the past week, such as failing to denounce white supremacy. As 2020 Pulitzer Prize-winning poet Jericho Brown, who I had the pleasure of seeing at his Midwest Poets Series reading in 2017, tweeted, “This is a great way to change the story away from his white supremacy.”

This, I think, is what we really need to be focusing on, regardless of whether or not Trump has actually contracted COVID-19. Even if Trump is sick, Trump is still a bad person. And while COVID-19 is a terrible disease, that does not make the people who get it less terrible.

At this point, after his complete failure to contain the pandemic in the United States, Trump’s presidency and COVID-19 are intertwined. They are both terrible things which need to be ended.