Students share concern for cost of parking, lack of spots on campus 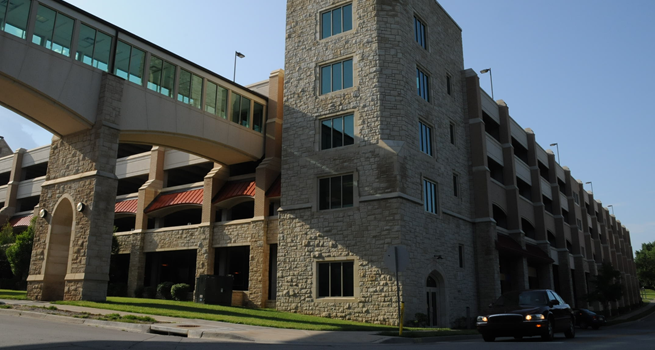 UMKC commuter student Angel Rojas walks half a mile every day for class.

Rojas, a senior biology major, says he used to purchase a parking pass, but didn’t get one this semester because he could never find parking.

“I refuse to buy a parking pass,” said Rojas. “I park on the street now, but when I had one, I could never find a spot, and just ended up parking on the street anyways, which is free. Now, thanks to my phone tracking my steps, I realized I’ve been walking about half a mile from my car to class each day, which is kind of ridiculous.”

Like Rojas, other students are disgruntled about the lack of available parking. Those who have purchased parking passes often have to leave their homes well in advance of class for the chance of getting a decent parking spot.

“I have to leave my house over an hour early,” said Cheyanna Hylton, another biology student. “If I leave my house at the 40-minute mark, I for sure won’t make it in time. Between the drive time, traffic, then trying to find a parking spot, I have to be sure I make it to class on time, which sometimes doesn’t always happen.”

Rojas and Hylton have both missed attendance points for not being on time to class.

“Some teachers give attendance points, and if you’re late after five minutes, you don’t get those points, which add up at the end,” said Hylton.

Rojas agreed. “Yeah, some teachers are cool, but some don’t care that you couldn’t find parking and will still deduct points.”

Ciara Pate, a junior communications major, says she also must plan ahead to make sure she can find a parking spot.

“If you’re not here by a certain time on Tuesdays and Thursdays, you’ll have a hard time finding parking in [the] garage by Haag Hall,” said Pate. “You’ll have to park on the street or park across campus and hope there is a spot available.”

Last fall, UMKC sold 6,800 parking permits, although there are only 5,010 parking spaces on campus. Some universities state that this is possible because students come and go throughout the day, but this does not take into account the throngs of students who arrive during popular class times.

Many students have classes before 3 p.m., and the decrease in available parking spaces at this time brings with it a sizable increase in parking tickets.

A student parking attendant, who preferred to remain anonymous, said he writes around 10 tickets in a three to four-hour work period.

The cost of these tickets, which starts at more than $30, quickly begins to add up for students, rivaling even the price for a permit itself.

Along with the lack of parking spots, students are also concerned with the price of parking permits.

Janelle Olawaiye, a student in the Master of Business Administration program, says she doesn’t have a problem finding a parking spot but wishes the permit was cheaper.

“I’m only on campus one night a week though, so I shouldn’t have to pay $120 for a permit,” said Olawaiye. “That seems a bit much.”

“School itself is already expensive enough,” Patrick said. “I pay for most of school out of pocket, like most students, so an extra fee for parking isn’t necessary. Especially since you can hardly ever find a spot.”

Eric Giles, a student in the Master of Music Performance program, says the price of parking permits should be lowered and included in the cost of tuition.

“We’re already poor, so if you’re going to charge us to park, just put it in with the other fees instead of making it separate,” Giles said. “I would rather there be no fee, but since I know that won’t happen, at least make it cheaper.”