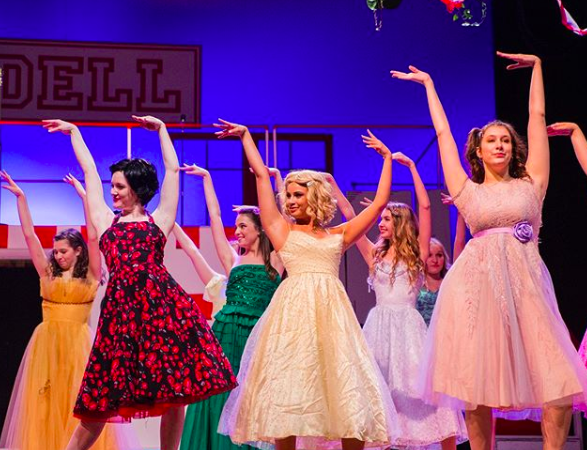 Do you ever wonder why directors emphasize lights first in such a phrase? Well, lights are more important to a show than you may think.

Senior Rachael Carney was recently awarded best technical production by Broadway World Kansas City for her work on “Grease” with Stage Right KC at Center High School. The award focuses on a show’s use of lights and sound.

“I’m thankful for the award,” said Carney. “The amount of work everyone put into ‘Grease’ was insane.”

Carney spent many hours working on the show—to the point she only got six hours of sleep over four days. Months were filled with rehearsals, production meetings and overall planning.

While Carney focused on lights, she worked alongside junior Austin Skibbie (director), Aly Brooke (costume designer), Chris Shaklin (scenic designer) and many volunteers who made “Grease” a success

Carney said her love for what she does is difficult to put into words.

“The production life is an entirely different beast that asks for so much, and no one sees that,” said Carney.

This is her second year in a row receiving the award from Broadway World Kansas City. She won it last year for her work on “Willy Wonka” with Stage Right KC.

As amazing as an award it is, it can never beat her first award from the Kennedy Center American College Theater Festival (KCACTF).

KCACTF awarded Carney the first-place national lighting design award for her work on “Gruesome Playground Injuries,” which she worked on during her time at Johnson County Community College (JCCC).

“It was a good thing I received it, since I didn’t see myself as a good designer,” said Carney. “I was about to quit lighting at that point, but the award encouraged me not to.”

While Carney enjoyed her time at JCCC due to its tight-knit theater family, she also enjoys the many opportunities the theater program at UMKC has to offer and its influential professors and students.

Freshman Henry Madriles met Carney during his first semester at UMKC while working together on the fall opera.

“She never complained and did what she was expected to while keeping a positive attitude,” said Madriles. “She is a wonderful person to work with, whether it’s in or outside of theater.”

Carney plans on continuing her work with lighting in the future. A dream show of hers is to work on a concert performed by Dutch DJ Tiësto.

Besides lighting, Carney’s future plans include helping those in need in Kansas City.

“It’s the people around you that are the most important,” said Carney, who thanked her friends and family for their support. “I’m here to do what God calls me to do.”