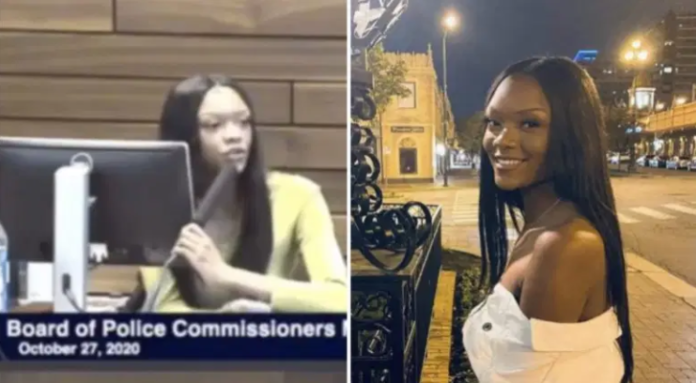 Local activist KJ Brooks recently went viral after a video of her condemning the Kansas City Police Department (KCPD) was posted to Twitter. The video shows Brooks calling out each member of the KCPD Police Board during a speech at an Oct. 27 police board meeting.

Brooks, who is only 20, is already well known within the Kansas City Black Lives Matter movement and has begun to garner national recognition due to the video.

“I’m not asking y’all for anything, cause y’all can’t and won’t be both my savior and oppressor,” Brooks said in her speech. “I don’t want reform. I want to turn this building into luxury low-cost living.”

Among the members Brooks criticised was UMKC professor David Kenner, who serves as the secretary of the Police Board.

UMKC senior Daisy Garcia Montoya said she first heard of Brooks when watching the video and was surprised to see that Brooks is from Kansas City. She said she was impressed by how poised and factual Brooks was in the speech.

“I thought it was so crazy that it all happened in KC,” said Montoya. “Everything she talked about happened here.”

“I think it was great to see it,” Montoya said. “But it sucks that she had to go viral for all of us to see what is going on. It makes me happy to see she’s getting representation.”

After viewing the video and following Brooks on social media, Montoya said she also explored the page of an organization Brooks co-founded, Tha Chingona Collective.

“Tha Chingona also caught my attention because I know [what] that word means, and it’s really cool to see BIPOC women coming together,” Montoya said. “We are non-white, but we have specific needs. And we can help each other by listening to these needs.”

Montoya, who is the president of the UMKC Latinx Student Union, is an activist herself. She said seeing an activist from Kansas City go viral was inspiring.

Mason Bur, a UMKC junior who has been active in many BLM protests where KJ has spoken, was also happy to see Brooks go viral.

“It was really cool that she was able to do something like that at her age,” Bur said. “It is something she is doing as a part of her daily life. It’s not like she knew it was going to go viral. She made this [activism] a life.”

Bur said that while the broad attention the video has gained has been good for Brooks, it has potentially opened her up to danger.

“She’s gotten attention, and I think it’s good she has a large, more national platform,” Bur said. “All of that attention is definitely a good thing, but it’s also important to realize the police are unfairly targeting her.”

This refers to recent allegations Brooks has made on Instagram in which she claims members of the KCPD have followed her and called her on the phone in order to track her.

Bur added that there is a BLM protest every Friday night at the downtown headquarters of KCPD, and he encouraged more people to attend.