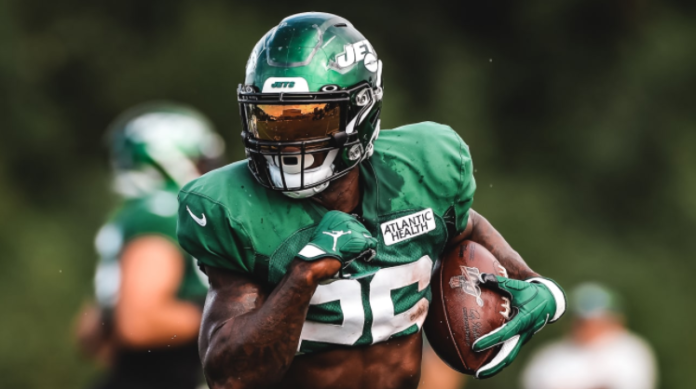 The Kansas City Chiefs signed three-time Pro Bowl running back Le’Veon Bell to a one-year deal worth up to $1.69 million last Thursday night.

Quarterback Patrick Mahomes said he is aware of what Bell can do for the Chiefs, but he said that the front office and coaching staff will take care of how they utilize Bell in the game plan.

“Obviously, Bell is a tremendous player. Someone that can do it all, catch the ball, run the ball,” Mahomes told Arrowhead Pride.  “But I let Veach and all of them handle that, and whoever is in the locker room, we make sure they’re ready to go and make plays on Sundays.”

Tuesday evening, during the Tennessee Titans-Buffalo Bills game, news broke that the Jets had decided to release the disgruntled Bell after not finding any trade suitors.  Earlier in the week, there were reports that Bell was upset with head coach Adam Gase and how he was being utilized in the Jets’ offense, and that frustration led to the Jets exploring trade options for the running back.

Gase carries a reputation for not putting his players in the best position. Players line Ryan Tannehill, now with the Titans, and Kenyan Drake, now with the Cardinals, were both former players under Gase when he coached the Miami Dolphins a couple of years ago. Tannehill led the Titans to an AFC Championship appearance last season against the Chiefs. During this past offseason, Tannehill inked a four-year, $118 million deal with $62 million guaranteed. Last season, Drake was traded to Arizona for a conditional 2020 draft pick. During his time in Miami with Gase, Drake showed glimpses of promise, but Gase never awarded the running back with consistent time on the field.  In eight games with Arizona last season, Drake had 123 carries for 643 yards and eight touchdowns.

People may be thinking, ‘What does this have to do with Bell?’ Well, like Tannehill and Drake, Bell was never placed in positions on the field to succeed. During the 2019 offseason, Bell signed a four-year, $52 million deal with $27 million guaranteed with New York. Bell only appeared in 17 games for the Jets, and during his time there he ran the ball 264 times for 863 yards and three rushing touchdowns. These stats suggest Bell was inefficient with the Jets. He was supposed to be a workhorse back. However, during Bell’s sint in New York, Gase used inferior running backs way too often, leaving Bell on the sidelines. For example, under Gase, 37-year-old veteran running back Frank Gore often took touches away from Bell. In week five against the Cardinals, Bell only out-touched Gore 14-9. Gore is a future Hall of Famer, but he is way past his prime, and this seemed to be a way for Gase to show his pettiness towards Bell.

While the Jets are in the bottom of the league in every offensive category, the Chiefs have a prolific offense who can score at will. However, the Chiefs have struggled running the ball so far this season. Through the first five weeks, Kansas City’s running backs only have one rushing touchdown, and that came on a 27-yard run from Clyde Edwards-Helaire in week 1. Helaire is a talented running back, but he struggles in short-yardage situations. He has seven goal line carries through five games, but has failed to score on all those attempts. Bell will bring superior size and physicality when it comes to the redzone. Bell will most likely be used in short-yardage situations, third down, and in the red zone, but he has a legitimate chance of earning an expanded role in this offense. Bell is still only 28 years old, and he possesses not only running skills, but also pass-catching ability. Helaire has done a great job in the passing game, but he does not offer the same pass protection as Bell does. The Chiefs did lose offensive guard Kelechi Osemele for the season when he tore ligaments in both knees against the Raiders in week 5.

The Chiefs will need Bell to be their change-of-pace back who can take the load off of Helaire. Also, Bell will not have to be the bellcow he was in Pittsburgh a few years ago, and in this offense he will be surrounded by weapons like Tyreek Hill, Travis Kelce, Mecole Hardman and Sammy Watkins. While in New York, teams would stack the box and dare the Jets to beat them through the air. In Kansas City, Bell will face six man boxes because of the attention that Hill and Kelce require.

Bell will also be a major benefit for Mahomes, who has faced an immense amount of pressure through the first five weeks. Mahomes has received hits in multiple games this season, especially in week 5 against the Las Vegas Raiders. He was forced to throw the ball 43 times and was sacked three times, while facing 21 pressures, the second most in his career. If the Chiefs want to keep Mahomes healthy, they must protect him by establishing a run game and limiting the amount of times he throws. Establishing a run game with a 1-2 punch in Helaire and Bell will keep opposing offenses off the field. With a better run game, Kansas City can develop longer drives, allowing their defense to rest before retaking the field. In week 5, Kansas City had many drives that resulted in quick scores, or drives that ended quickly.

Bell will not be eligible to practice with the Chiefs until he completes the NFL’s COVID-19 safety protocols.

According to ESPN’s Adam Teicher, “Bell will need to test negative for five straight days, and is then eligible to practice if he’s negative on a sixth day ‘point of contact’ test.”

Bell is set to make his debut for the defending Super Bowl Champions in week 7 against the Denver Broncos.