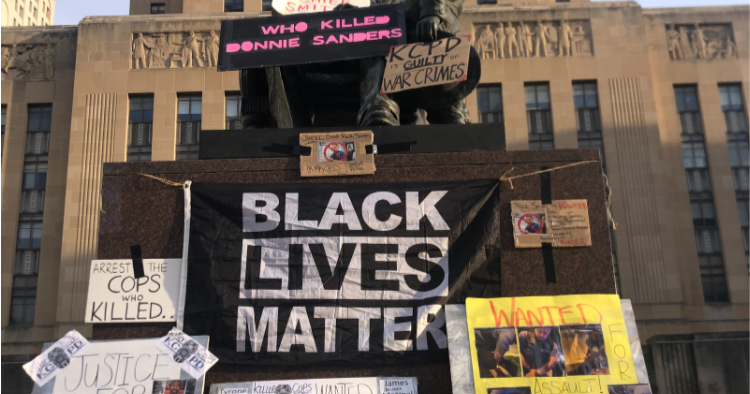 Around 100 protestors occupied the Kansas City Hall Plaza on the night of Friday, Oct. 2 in response to a video showing an officer kneeling on a pregnant woman during an arrest.

The video shows KCPD Officer Newton pulling 25 year old Deja Stallings onto the ground, and kneeling on the woman’s back while trying to detain her. Stallings, who is 9 months pregnant,  was taken to the hospital after the incident.

The incident sparked outrage among activists, who have protested against police brutality throughout the summer.

Protesters arrived at city hall at 6 p.m. on Friday and stated they would not leave until Stallings “gets justice,” according to an Instagram post by the group, Black Rainbow.

The group published a list of demands on the same Instagram post, including the firing of Officer Newton, the firing of Chief of Police Rick Smith and the divestment of 50% of the KCPD budget into social services.

Protesters played music on speakers during the beginning of the occupation, eventually turning it off due to worries that police would use the noise as an excuse to break up the demonstration.

Protesters set up tents and organized sleeping shifts late Friday night, so there would always be some people awake. At 2 a.m., rain and cold wind forced most of the protesters into the tents.

“We were asleep. We have not violated any laws, no noise ordinances. We have cleaned up the area in city hall where there was trash before we got in,” Shaw said. “The police officers are intentionally terrorizing us so that we’ll stop protesting.”

Lucas then added that protesters can continue the occupation indefinitely “barring any city council action.”

Immediately after, Lucas walked back to the KCPD Headquarters, while protesters called for the mayor to call a vote to fire Smith, chanting “Quinton Lucas call the vote.”

The occupation is ongoing as of Oct. 4.