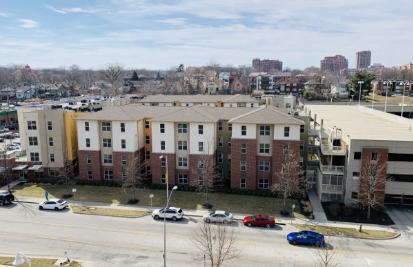 UMKC began the demolition of Oak Place Apartments on July 7. The apartment building, which sits on the western edge of the Volker Campus, has been a problem child for the university since 2017, and the problems with the building are far from over.

The new student housing encountered a major issue in October 2017 after an increase in water leak maintenance requests led to the discovery of cracked PVC pipes inside the nine-year-old apartment building. The university finished the initial repairs that month, hoping the problem had been contained.

Students in the north wing of the building learned the next month that they would need to move out of the water-damaged Oak Place Apartments for further repairs, which were estimated to cost $10 million.

Mold continued to spread despite the best efforts of the university, which forced the remaining 252 students in the south wing of the building to vacate their rooms. UMKC assessed the damage to determine its next steps. One option included scrapping the decade-old building.

“If you think about when a car is in an auto accident, there’s a certain point where you say ‘I need a new car,’” Associate Vice Chancellor of Administration Robert Simmons stated in March 2018. “We have not made that determination, but that is one of the things you do look at: Is there a point where you say you’re going to have so many parts and pieces that you just start over?”

That decision came two years later in March 2020, when Chancellor Mauli Agrawal announced the plan to demolish the apartments in the coming summer.

“I’m just surprised,” said UMKC alumni Sherry Jackson, “I just was dropping off my [dry] cleaning and saw that it was being torn down, and I feel like they just built them.”

While there are no specific plans in place for the site, UMKC spokesman John Martellaro stated that the university’s goal “remains to develop new, affordable student housing that may include retail and other uses on the site.”

He added that the university is preparing a study on student housing to determine the path forward, which could align with Kansas City’s plans to extend the streetcar line to the campus.

“If they added a restaurant or even like a basic store to get necessities from, I think that would be more beneficial for the students,” Jones said. “I was also thinking about if they did rebuild different apartments, but then it’s just like, what was the point, if they couldn’t keep up the last apartments?”

Before any projects can begin, UMKC would have to obtain the necessary funding. Slashes to state funding and the massive costs associated with COVID-19 have resulted in a 15% cut to UMKC’s budget and could potentially hamstring any new developments on the Oak Place site.

Legal Recourse and the Predicament on the Board of Trustees

The University of Missouri Board of Curators filed a lawsuit in March 2018 against JE Dunn construction, Gould Evans Associates and other companies involved in the construction of Oak Place. The board listed 34 entities responsible for what it called “reckless” construction and design.

JE Dunn Construction and Gould Evans Associates were the general contractor and architectural designer of the Oak Place Apartments, respectively.

The current chairman and chief investment officer of JE Dunn, Tim Dunn, sits on the Bloch Advisory Council and is a regular alumni member of the UMKC Board of Trustees. He also sits on the finance committee for the Board of Trustees, which is accountable for the “management of the endowments, the restricted funds and the finances associated with the UMKC Trustees’ real estate program.”

The Dunn family has donated major sums of money to the university, including funds for a classroom in the Bloch Executive Hall.

JE Dunn Construction also made a sizable donation for the new School of Computing and Engineering building. The donation was announced in a UMKC Foundation release from January 2018, two months before the lawsuit was announced.

This lawsuit could cause tension with the Dunn family, who are consistent high-ranking donors to the university.