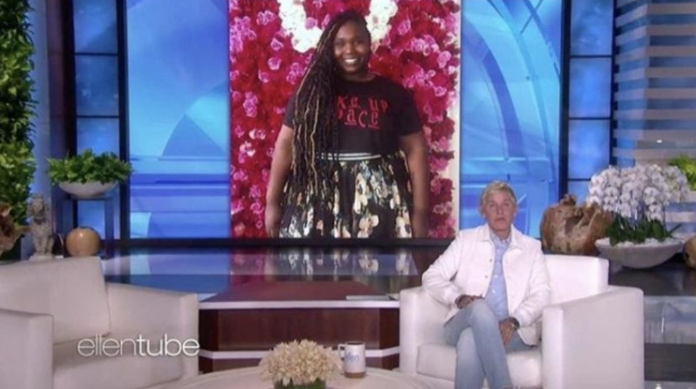 In September, U-News sat down with Bowman to highlight her business, an upcycled plus-size boutique. A month later, she got a big surprise in her email inbox: producers from “The Ellen DeGeneres Show” were contacting her to ask her questions about her business.

Bowman said she thought the email had to be spam, so even after getting a call from a producer, she waited a while to open the message.

“When I read the email, I thought it was a joke,” Bowman said. “But I found them on LinkedIn. Then I called them back. Next thing I knew, Ellen said, ‘Hey, Alesha!’”

When Bowman contacted the producer, they asked to set up a behind-the-scenes type of interview with her, where she thought she would just be meeting over video chat with producers from the show. To add to the surprise, when Bowman answered the video call, Ellen DeGeneres (mononymously known as Ellen) was on the other end instead of her producers.

Despite her unexpected appearance on national television, Bowman said she kept her composure.

“I don’t like extreme attention,” Bowman said. “I would rather just grow my business on a local level or by word-of-mouth. But I’ve grown to learn you also need that extra push. I’m not a boastful person, though. I’m cool as a cucumber. I don’t want to be famous.”

At the end of the show, Ellen presented Bowman with a check for $10,000 to help pay her store rent. Bowman said the money will help her save up to rent a bigger space and better serve the community, as weekends at UnLESHed+ are usually packed.

Those who are interested stop by UnLESHed+ on Troost Road to grab a photo with Bowman’s “As Seen on Ellen” sign.