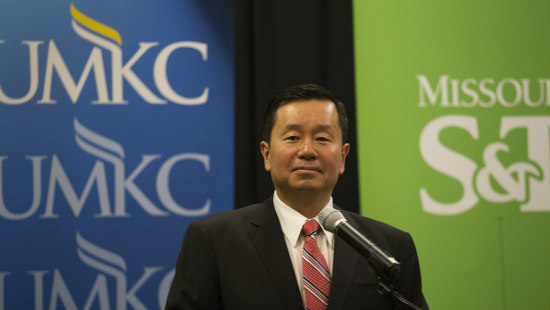 Program cuts and staff layoffs throughout the UM System will likely result from goals laid out by UM System President Mun Choi during his “State of the University” address.

In an appearance on KCUR’s Up To Date last Thursday, chairman of the UM System Board of Curators David Steelman said, without funds from the Missouri General Assembly, the university will have to make cuts to internally fund priorities in upcoming years.

“We can’t just sit around and wait for the general assembly,” said Steelman. “We are going to make some cuts. Some people are going to lose their jobs. There are going to be program cuts, but we are going to get the money now for the investments that this state needs.”

During his Sept. 14 address, Choi discussed challenges facing higher education today and laid out the cost-cutting plan for a more efficient, focused and innovative UM System.

Choi stressed the importance of innovation and breaking away from “business-as-usual.”

“We must have innovation at our core for everything that we do,” said Choi. “Collaboration across the entire system, bold actions that lead to meaningful results and strategic investments that guide us now and well into the future.”

These streamlined investments include:

Choi said the money for these investments will come from strategic budget cuts and reallocation of funds from other projects and departments within the UM System, which Steelman expanded upon Thursday.

“Not every program is as relevant to students as they were 50 years ago, yet some of them still exist. That can’t continue,” Steelman said.

Steelman explained the system will take an approach to divide resources to match each campus’ needs, and consolidate administrative services across all four campuses.

According to Steelman, the system also aims to increase internal revenue with increased enrollment including a 24-38 percent enrollment boost at UMKC alone.

Steelman said he thinks the move to build the new arts campus closer to UMKC’s Volker campus will help attract the higher enrollment. He also added that selling the university as a “product” will also help raise enrollment numbers, citing improving the basketball program and adding scholarships.

Specific to UMKC in Choi’s address, were plans announced to expand Kansas City Sourcelink, a service created by a UMKC professor that connects startups and small businesses in Kansas City to capital pools they need to succeed.

The plan is to make it statewide program by creating Missouri Sourcelink, an expansion funded by the Missouri Technology Corporation.

Choi also detailed plans to expand the UMKC-created “American Public Square,” a forum with goals to help change the tone and quality of public discourse in America.

The UM Board of Curators approved the ambitious plan detailed in Choi’s address in July.

“Let’s achieve excellence together,” Choi said as he ended his address.

Choi’s complete address can be found at umsystem.edu, and Steelman’s full interview on Up To Date can be found at http://www.kcur.org/post/seg-1-road-ahead-missouri-public-universities-seg-2-growing-need-geriatricians.