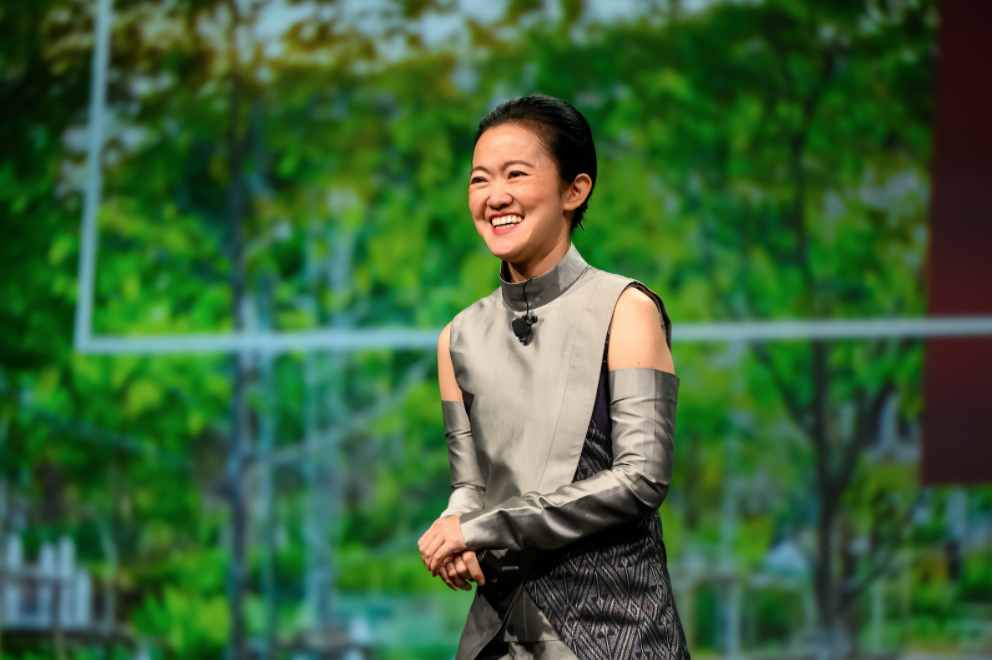 Happy Earth Week, UMKC! Our usual events have been canceled, but it’s still been an interesting month for the planet. While cities around the world are on lockdown, people are reporting a drop in air pollution levels and a return of wildlife in urban locations. Calls for post-pandemic lower emission and bans on wildlife trade are increasing. But as we (hopefully) near the end of the crisis, a daunting question looms: what will our cities do to tackle climate change when this is over? One of the women who has been working on long-term climate solutions is landscape architect Kotchakorn Voraakhom.

Voraakhom grew up in Bangkok, Thailand. As a child, she enjoyed paddling a boat with her friends through the flooded landscape, but she didn’t yet know the dangers of rising sea levels and a sinking city. Voraakhom’s parents encouraged her to receive an education. She completed her bachelor’s in landscape architecture at Bangkok’s oldest university: Chulalongkorn University. After undergrad, she relocated to the U.S. to complete her master’s in landscape architecture from Harvard University in 2006. She also co-founded the Konkuey Design Initiative, an international collaboration to help community members rebuild public spaces like green buildings and parks.

After finishing graduate work, Voraakhom returned to Bangkok to put her new knowledge to good use. Her work became especially important in 2011, when severe flooding killed over 800 people and displaced millions, including Voraakhom’s family. A fifth of the city was left underwater. Bangkok was built on a network of canals and was referred to as the “Venice of the East.” And much like Venice, it’s one of the most at-risk communities for climate change and sea-level rises. That’s where Voraakhom’s expertise plays a critical role. In 2011, she founded her company, LANDPROCESS, to tackle rising water levels using urban landscaping. Her company has been involved in multiple high-profile projects, including designing the Thai Pavilion at the 2015 Expo in Milan.

In 2017, Voraakhom was contracted to build the city’s first public park in three decades: the Chulalongkorn University Centenary Park. Her 11-acre design included a three-degree slope to control water flow and a large retention basin, capable of absorbing a million gallons of water across the greenspace. She also included stationary bikes that aerate the water in the basin, allowing community members to participate in the flood mitigation strategy. The same year, she founded Porous City Network to educate community members and get them involved in facing climate change.

In 2018, Voraakhom’s company converted a helipad at Ramathibodi Hospital into a 1,500 square-meter rooftop garden, named after Princess Maha Chakri Sirindhorn. In addition to acting as a healing space for patients, the garden also helps with water absorption and features a Recycle Wall made of 700 recycled saline bags. Last year, LANDPROCESS opened the largest farming green roof in Asia (36 acres) at Thammasat University. The farm grows food for hungry students and, in combination with other green spaces on the campus, can absorb more than 2.5 million gallons of water.

Voraakhom is currently working on the Bangkok 250 Plan—the city’s redevelopment efforts for its 250th anniversary in 2032. She’s a TED fellow, an Echoing Green Climate fellow, an Atlantic fellow and an Asia Foundation Development fellow. Last year, TIME Magazine named her as one of their 2019 TIME 100 Next.

Previous articleTriage of a Mouse
Next articleUMKC SGA donates over $20,000 to Student Emergency Relief Fund