Anchor and Discourse to be phased out, replaced by UMKC Essentials 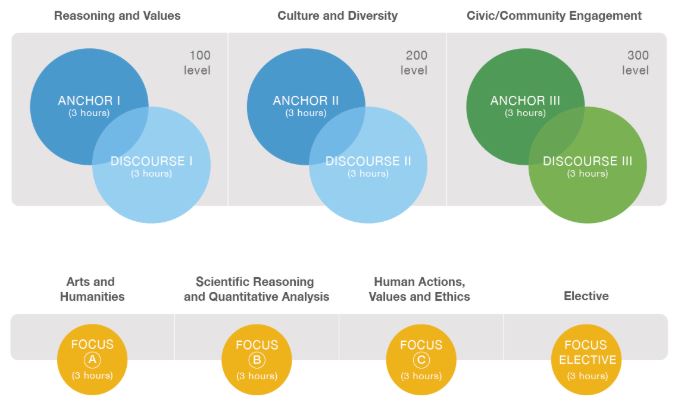 Loved by some and reviled by others, UMKc’s general education program will soon be phased out.

Anchor and Discourse, otherwise known as the UMKC General Education Core, is being revamped as UMKC Essentials, or GE2.0. The new program is designed to meet requirements outlined in Missouri House Bill 2651, the Higher Education Core Curriculum Transfer Act.

According to the UMKC Office of the Provost, the core curriculum will shift from the 18-hour Anchor and Discourse system to a 30-hour program starting fall 2020.

The Office of the Provost states GE2.0 was developed in 2016 by the General Education 2.0 Task Force and approved by Provost Barbara Bichelmeyer in March 2017.

CAS Director of Student Services Becky Bergman served on this task force and is confident that GE2.0 will accommodate a range of students at different points in their degree progress.

Bichelmeyer said GE2.0 is “driven by clearly stated and measurable student learning outcomes that articulate the essential competencies, which faculty strive to instill in all UMKC’s undergraduate students.”

Some faculty and staff welcome the changes as much-needed improvements.

“The process should be as student-friendly as possible with very clear learning outcomes and required expectations for graduation,” said CAS Advisor Cindy Eick McDonald.

According to McKiddy, students often struggled with taking Anchor and Discourse classes as corequisites that fit their schedule.

Others felt Anchor and Discourse benefitted both students and instructors.

“Each semester, the views and ideas of the students have radically impacted my own thinking and broadened my own horizon,” said Rudy.

Still, the general consensus among faculty and staff is relatively unclear, as many instructors said they hold opinions on the subject that might threaten their job security.

A university representative who asked not to be identified said that “most students do not like [Anchor and Discourse] at all,” adding that some colleagues “knew from the start that…this was going to be a mess, and we were ultimately correct.”

While students do enjoy their Anchor and Discourse class, some feel they don’t apply towards their major.

“I like them, but I don’t see how they’re going to help my major,” said Dominique Nichols, a UMKC nursing student. “My Anchor class is about how cities are planned, and my major is nursing. So they don’t really have much in common.”

As the shift from Anchor and Discourse to GE2.0 is implemented in fall 2020, students are likely to be confused as to how it affects their degree progress.

Students like Nichols that are still working their way through the Anchor and Discourse system will “likely continue and complete under that model,” according to Bergman.

Bergman said first-time college freshmen will start with GE2.0 while transfer students can opt into the MOTR Core 42.

“There is a plan to gradually dwindle Anchor and Discourse offerings,” Bergman said, but “students should try to complete their Anchor/Discourse ASAP since selection will be limited as time goes on.”

Previous articleIt all starts with a vision: Students dream big for the future
Next articleUMKC students awarded for program that detects fake news