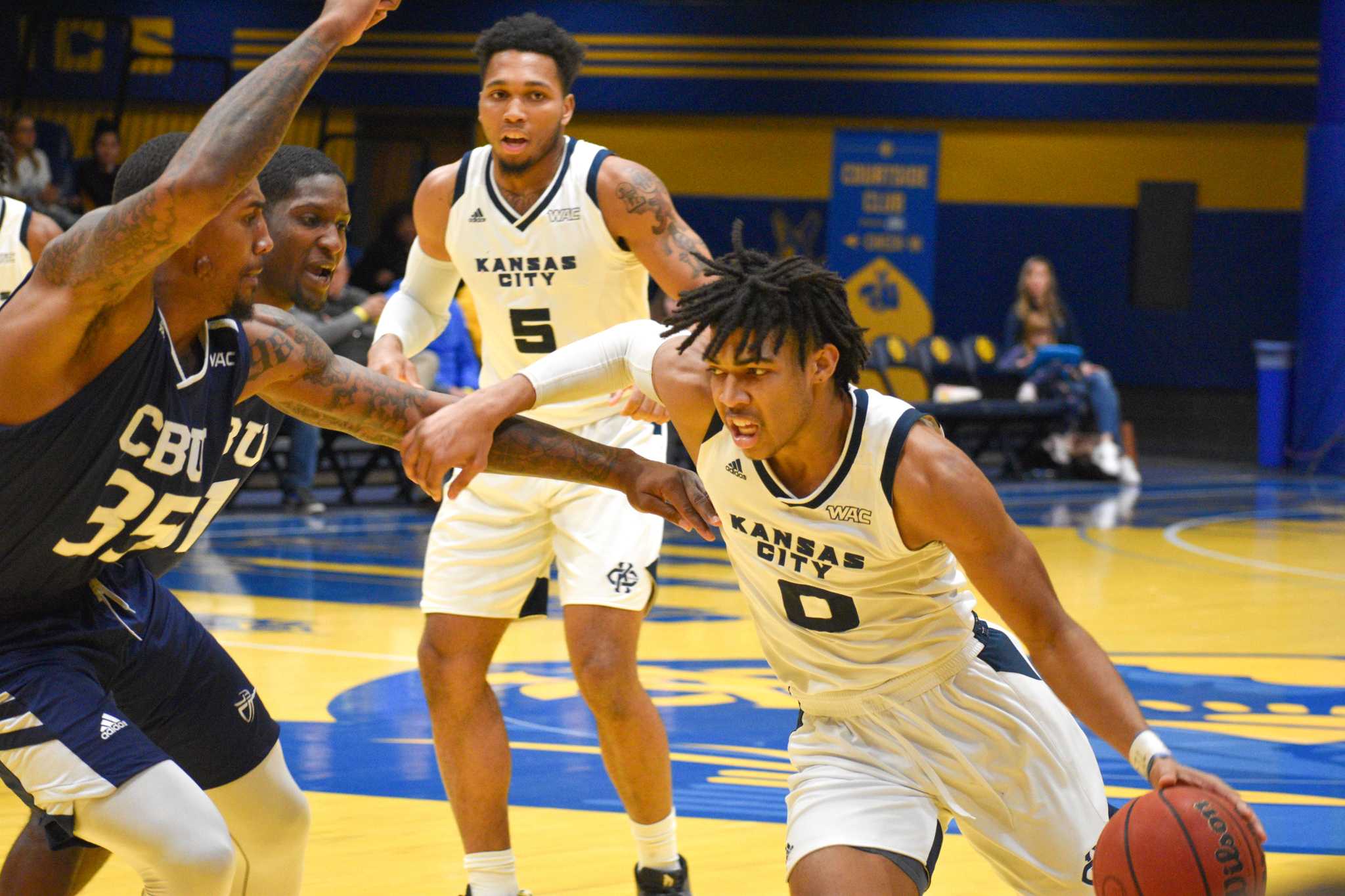 Roughly 20 minutes after another Kansas City victory, senior Jordan Giles slowly emerged from the team medical room, wrapped up from bicep to shoulder in tape.

“You don’t want to get old like me,” he joked as he walked atop the painted hardwood and into the locker room with teammate Zion Williams.

Giles’ sense of humor is both coy as it is rational. On a night where Kansas City stifled the WAC’s No. 2 team, California Baptist, 69-63 at the Swinney Center, the team’s wily four-year-Roo brought out old tricks from his bag.

Giles toyed the Lancers all night, showing off a repertoire of fade-aways, layups and post-ups. The 6-foot-7-inch forward finished with a team-high 17 points, two rebounds and one assist to go along with a super efficient 7-of-11 shooting.

“We needed a guy to set a tone,” Head Coach Donlon said as he draped his arm around Giles in the postgame press conference. “Our senior, who now only has 40 minutes left [at Swinney] provided that from the start of the game. You need an older guy to say ‘I got you’ and [Jordan] put it on his back early. I can’t speak highly enough of what he did.”

Giles was on the shortlist of players to stick with the program following former Head Coach Kareem Richardson’s dismissal last spring. Through it all, the senior has produced his best statistical season during his four years at the school; setting career highs in points, rebounds, blocks, field-goal percentage and three-point percentage.

“I like to credit coach (Donlon) for my development,” Giles said. “The big key to this program is developing players as much as possible. We practice hard, most teams don’t practice as hard as we do on a day-to-day basis. That’s shown throughout the course of this month and beyond.”

From one form of veteran-leadership to the other, Kansas City also utilized a strong outing from forward Javan White. The 6-foot-10-inch, 227-pounder was tasked with handling the five-man role in Donlon’s four-guard lineup off the bench. In 23 minutes, White stood tall, tallying 10 points, nine rebounds, one block and a steal, all while guarding Lancers’ 6-foot-7-inch bruiser De’Jon Davis all game long.

“I tried to match his physicality and play hard,” White said. “That’s my biggest thing: to play hard, not foul, and provide high intensity whenever I’m on the court.”

Donlon added to White’s statement, saying he was a critical piece in preventing California Baptist from grabbing every missed shot.

“We’ve been a team that’s struggled to defend our glass, and at times we did,” Donlon said. “But down the stretch when we had to play Javan at the 5, what he did to own the backboard, won us the game. This is a game he could’ve had 16 tonight and he just didn’t, but that happens. He defended the backboard and made two big free throws late. You guys don’t see the work he puts in at the foul line. It’s terrific.”

In addition to holding its own on the glass, Donlon was proud of how his team stymied the Lancers’ perimeter shooting. California Baptist entered the week 16th and 21st, respectively, in the nation in three-point percentage and three-pointers. On Tuesday night, the Roos surrendered only five triples on 25 attempts (20%).

“A lot of their threes were not good looks,” Donlon said. “When you play them, because they have a great scheme, great players, you have to pick how you want to guard them. To be fair, they probably should’ve been 8-of-25 from three tonight. But our guys did a great job. You have to pick your poison.”

Kansas City’s latest win improved their record to 14-14 and 6-7 in conference play. For comparison, the Roos were 10-18 at this point last season. Donlon, who’s not one to hype up ‘program-building wins’ was still pleased with his group’s efforts.

“This was an important win, [considering] all the parity in the league,” Donlon said. “Big picture for us is I wanted our seniors to feel good about leaving their home court and how they got to do it one more time.”

Giles and White are two of the four Roo seniors (Jahshire Hardnett and Rob Whitfield are the others) that will celebrate their final home game in a Kansas City jersey on Feb. 29 vs. Chicago State. Both Donlon and Giles provided their thoughts on what next week’s moment will mean.

“Winning is hard, the first thing coach Richardson brought was really good young men, good people into the program,” Donlon said. “That’s the thing with Jordan Giles, he’s an amazing young person, he’s so respectful, he cares about his teammates.”

“It’s been a long 11 months for everybody, from the first meeting I came here to now. I love Jordan, no matter what I’ll always be there in his life, I love him. I can’t explain to you the jumps he’s made in every aspect of his life. That’s why I think he’s played so well for us.”

Giles said, “I’m looking forward to obviously having a good moment that I can remember for a long time down the road, [but] also one I can cherish with my teammates and family.”