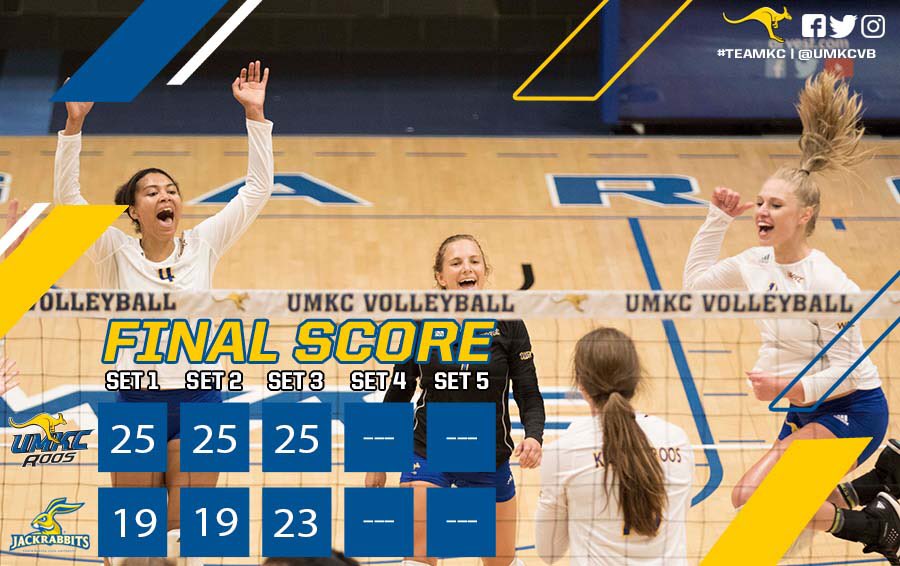 The UMKC volleyball team set the pace in their home opener, by beating the South Dakota State Jackrabbits. The first two sets were won, 25-19, while the third set was a nail-biting, 25-23.

Both teams had their share of errors in the contest, but the Jackrabbits made a few crucial mistakes which helped UMKC’s momentum. The Jackrabbits tried to rally  twice in the third set, after being behind 20-10 at one point. Nevertheless, UMKC was able to pull out the set in the end, with some  well called time-outs  by Coach Christi Posey.

There were  strong performances by UMKC players all around. Alicia Harrington had one of the better performances, with an astounding 12 digs. Tyrecia Lukes had a significant amount of UMKC’s points, with 13 in the match. Alli Schomers had an amazing 19 assists.

Harrington commented after the game.

“Our team played well,” she said.

She said that South Dakota state was a worthy opponent, and that they had “strong communication” throughout the game. She was glad that it was good competition, especially on the season opener.