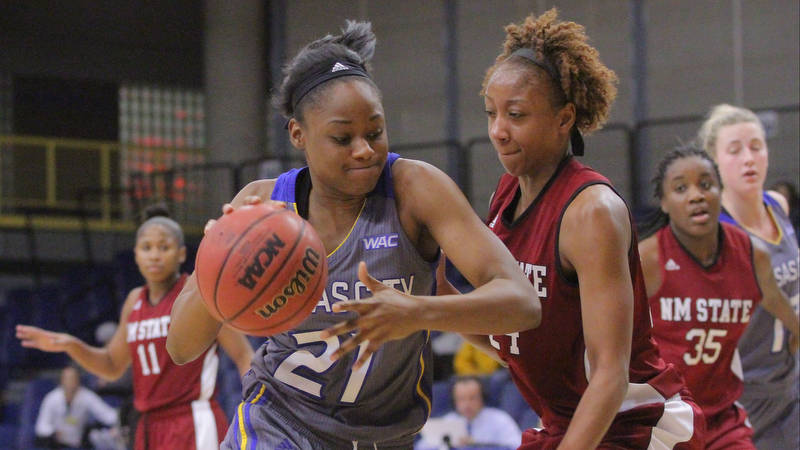 The UMKC women’s basketball team secured its first WAC victory of the season with a 65-59 win over Chicago State on Saturday in Illinois. The Roos’ Grace Mitchell and Kiana Law each recorded double-doubles. Mitchell scored a career-high 20 points and Law finished with a career-high 13 rebounds, two steals and two blocks.

“I’m really happy about how Kiana and Grace locked up the boards today,” UMKC Head Coach Marsha Frese said.  “They’ve made a commitment to this team to be our strong side in the paint.  When they want to rebound, they can put us on their backs and we saw tonight what they are capable of in this conference.”

“We needed this win,” Mitchell said. “It gives us momentum going forward in the conference and it shows that we can compete and win these games.  These teams are beatable and as a team, we can do a lot.  A lot of my performance today was my mindset.  Coming in, we were longing for a win and we knew this was a game we could grab.  Our mindset as a team was to look at this game as an opportunity and to capitalize on it and we did.”

The Roos’ victory over Chicago state broke an 11-game losing streak, improving its record to 3-14 overall and 1-1 in WAC conference play.

UMKC fought hard to gain the advantage in the first half, thanks to a six minute 14-2 run led by Mitchell.

The Roos hit 11 shots at the beginning of the second half, giving them an 8 point lead with 16:07 left on the clock. The game remained close until UMKC went on an 8-0 run with three minutes left to play.

“Today was a great example of what can happen when kids put in the work and they are consistent in their practice efforts,” Frese said.  “I’m really proud that were able to see the results of that on the stat sheet.”

The Roos will return to action on Jan. 22 when they take on Bakersfield at 9 p.m. CT.