‘We’re the Millers’ A New Take on a Road Trip 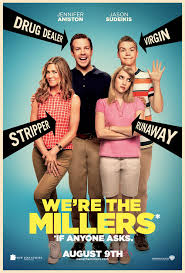 “We are the Millers” entertains audience members with brilliant performances from Jason Sudeikis (David) and Jennifer Aniston (Rose). Even Nick Offerman, better known as Ron Swanson from the television show “Parks and Recreation,” does give the audience his comedic gold

The movie follows a drug dealer (Sudeikis) who is down on his luck after being mugged by local thugs. Desperate to make up the money that he now owes to his boss, he agrees to smuggle a load of drugs across the border from Mexico. In order to get through the border unnoticed, he realizes he needs to recruit a family.

The premise of the movie is a bit unorthodox, but the audience will soon find themselves in the midst of a great night of laughs. There is a bit of brave work by Will Poulter (Kenny) who, at one point, gets a spider bite in a peculiar place, a lower body type of place.

The acting within the film is terrific. One surprise comedic performance in the film comes from Emma Roberts (Casey). She provides a wonderful angsty counter-balance to Will Poulter’s almost child like naivety.

In addition, Sadekis shows his charisma by often times losing his mind over keeping his newly acquired fake family together. Much of Sudeikis’s character is driven by greed and often times malice toward his “family” but it is obvious that the former Saturday Night Live star is enjoying his role in the film.

Aniston’s performance is another story. She spends most of the film half naked and only shows small signs of comedic energy. Aniston’s character usually acts as the support for Sudeikis, more like his comedic wing-man per-say. Her performance is spent either stripping on screen or complaining about Sadekis. Sadly her performance did not meet prior expectations.

Nick Offerman’s (Don) acting steals the show. Nick’s character meets up with Sudeikis while on the road to Mexico. Don and his wife are swingers who are looking to hook up with David and Rose. Taking this scenario and adding it to the brilliant work of Nick Offerman creates the recipe for some hilarious moments within the film.

Overall, the film was nicely cast and quite comedic. “We are the Millers” is a different take on the road trip genre and  does a great job of delivering laughs.