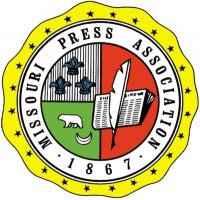 Ten U-News staffers piled up 19 individual and overall awards at the annual Missouri College Media Awards banquet Saturday night at Missouri Southern State University in Joplin. Competing in Division I, which includes universities with the highest enrollments, the U-News also finished third in the prestigious Sweepstakes category, which ranks newspapers according to overall honors .

The U-News received three awards for first place, four for second place, eight for third place and three for honorable mention. With two staffers sharing each of two honorable mention awards and receipt of the Sweepstakes award, the U-News came home with 21 award certificates.

“I see the awards as an affirmation of the immense progress U-News has made in the past year,” Editor-in-Chief Nathan Zoschke said. “This is the first time we have won a Sweepstakes award in four years.

“I was extremely pleased. My goal has been to see the U-News realize its potential as a quality, award-winning publication that adheres to its mission as UMKC’s truth-seeking independent student publication.”

Zoschke earned seven individual awards, including first place for feature writing, editorial writing and story illustration. The feature story, on UMKC Ph. D candidate Nazgol Bagheri’s receipt of more than $150,000 in grants and scholarships for the study of Iranian women, led a one-two-three sweep of the features category.

Second place went to Roze Brooks, for a feature on Peter Makori, a UMKC senior and U-News columnist, who as a journalist in his native Kenya experienced government harassment and imprisonment.

Third place went to Damion Alexander for his story on Kangaroos basketball player Kirk Korver, one of four brothers who has played Division I basketball, including, Kyle, currently in the NBA.

Zoschke also won first place in editorial writing by addressing UMKC’s proposed name change. He took first place for Best Story Illustration, with an arrangement of food items to accompany a story on students who buy their own groceries instead of using school dining facilities.

U-News awards were distributed among the news, features and opinion sections. Cartoonist Aaron Cecil also won a second-place award for depicting the Grinch driving a Santa sled for the cover of the Holiday edition, and a third-place award for addressing student debt.

“These awards acknowledge the tremendous improvement the U-News had made this year,” said Faculty Adviser Jon Rand.

“In my first year advising the paper, people around campus kept telling me how much the paper had improved and we won only two MCMA awards, none for first place. I would have been thrilled for us to win six or eight awards this year, so to win 19 represents a quantum leap for the U-News.

“And I’m delighted the way these awards have been spread around among the staff. I’m not sure there are many other student editors in the nation who could have overseen the kind of improvement Nathan has, and it’s gratifying to know he’ll be here next year to build on these accomplishments.

“He and the staff have really raised the bar for the U-News. We were not that far from being named Best of State, which was richly deserved by The Standard at Missouri State. But it’s entirely realistic to think we could be holding that trophy a year from now.”

Zoschke, second place in story illustration for a photo using students and block letters to accompany a story on UMKC’s gay-friendly reputation

Alexander, third place in sports writing for a story on national basketball recruiting

Sai Srikar Kadiyam, third place in feature photography for a shot of the Plaza Lights.

Zoschke, third place for best feature page on the feasibility of a downtown arts campus

Tyren Rushing, honorable mention for his column on being a “grumpy old man” on campus

Zoschke, honorable mention for an editorial on the 2012 presidential election

“It isn’t an easy job,” Zoschke said. “U-News requires serious dedication and time commitment. Some people look at us as a freelance paper, but we are actually a student-staffed department administered through the College of Arts and Sciences. However, participation is open to UMKC students of all disciplines.”

Previous articleSituation in Venezuela a cause for concern
Next articlePlayer Profile: Deanna Friese wins eighth ‘Pitcher of the Week’