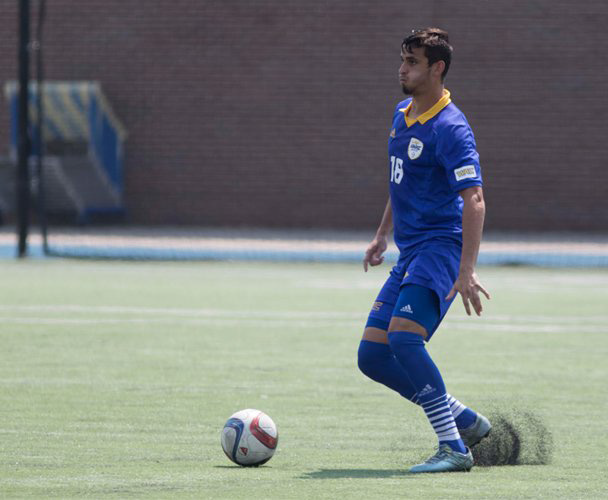 The UMKC Men’s Soccer team suffered their first loss of the season, losing 2-3 at home against Western Illinois Saturday night.

The 1-0 lead would not last long as the Leathernecks answered with a goal of their own in the 22 minute of play. Despite the 1-1 tie going into the half, UMKC looked sharp offensively totaling 7 shots, with three of them on goal.

After the half, UMKC continued to struggle with converting goals on their shots. “We had many opportunities,” Precheur said. “We should have scored more.”

Western Illinois didn’t have a problem finishing on opportunities as they were able to score in the 60 minute of play to take the lead. That goal was followed up shortly by a red card issued to UMKC’s Victor Olorunfemi, which resulted in a penalty kick to give the Leathernecks a 3-1 lead.

Being down two goals late in the game, UMKC played with urgency by taking the ball downfield. The aggressiveness paid off as they scored a goal with less than two minutes to go in regulation. The goal came from junior midfielder Diego Serfaty. UMKC finished the game with 15 shots, ten being on goal. Western Illinois racked up 15 total penalties in the game, compared to UMKC who only had 6.

The 2-3 loss was the first one of the season for the Kangaroos. UMKC’s record is now 2-1-3, two wins, one loss and three draws.

UMKC will host Missouri State on Sept. 19 before going on the road to Des Moines, Iowa to face Drake University.

Previous articleEric McWoods: A leader on and off the field
Next articleUMKC women’s soccer delivers well deserved win at Durwood