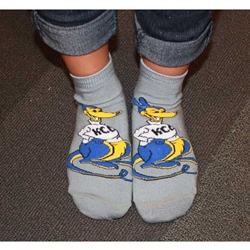 You walk through Rally House on the Country Club Plaza to get loaded up on this season’s gear. You want to represent your favorite teams so you grab that Royals tee and a Sporting KC scarf. But where is the UMKC Roo attire?
It’s a small chance that you will find a kangaroo plastered across any sports bar or sporting apparel store in Kansas City. I went into Rally House, which is located just eight blocks away from campus and was surprised at the lack of Roo gear in stock, even though we are neighbors. Is the demand not there? Do people not know about our athletic achievements? Do the students even care?
When talking to a UMKC alumna, Lauren Paszkiewicz, I found that she never felt as though they had the genuine college experience because of the lack of school spirit and interaction of students on campus.
“I graduated and never really thought twice about UMKC after,” Paskiewicz said. “You don’t make common connections with people from UMKC because no one seems to be interested in anything more than going to class. There is definitely a pride issue within UMKC.”
I took a trip to Lawrence to see how university life differed from our own and to see how KU students represent their school. I found that 60 out of 130 students walking around on campus were wearing a Jay Hawk. I stopped student Paige Opliger and asked her about her knowledge of UMKC.
“I heard it’s like the private schools of universities,” Opliger said. “You just never hear anyone from UMKC talk about their school. It’s like it doesn’t exist.”
I took the investigation back home. Walking around on our own campus, I found that only 17 of the 80 students I saw walking around had some sort of UMKC apparel on.
“It’s a 50/50 chance that you will see UMKC represented on campus,” said Sara Mikkelsen, a business student.“You see pro sports teams more often than our own. But if I go look in my classroom right now I will see no apparel for our school.”
Maybe it’s a pride issue. Maybe it’s just that we don’t hype our students up enough about sporting events, academic and arts achievements or advances in our departments. We have one of the highest-ranking universities across the country, but our students don’t seem to grasp that or care. Mikkelsen is a senior, this year and is graduating in May. I asked her if she knew (without googling) what our mascots name was and she replied “The kangaroos?” I asked Paszkiewicz the same question she said “Our mascot has a name? Seriously, since when?”
Kasey the Kangaroo got his name in 1936 when the editors of the school newspaper decided it was time to pick a mascot for the debate team. Since then, Kasey has suffered from some serious neglect from the students who he is meant to represent.
I’m not writing this to shame the students of UMKC or even to scold the citizens of Kansas City for not paying attention to the university it houses. But I am asking for a change.
Invite friends and family to UMKC events and allow them to see how wonderful of a university it is. Break the stigma that we are the “private school of universities.” Make UMKC exist. Make UMKC matter. Get involved and make your college experience a big part of your life because, if you’re lucky, you only get to go through it once.