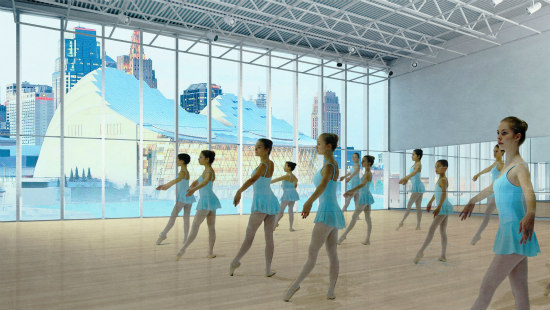 UMKC’s plans for a downtown conservatory are over.

The university announced earlier this month that all proposals for an off-campus facility submitted by architectural and construction firms must now be within 2.5 miles of the Olson Performing Arts Center.

With this announcement, the school invited respondents who identified sites outside the radius to submit new proposals that lie within the defined area. The deadline for respondents to submit proposals was Tuesday, Sept. 18.

“As this process has evolved, our conversations with our own performing arts faculty and staff as well as potential development partners, donors and members of the artistic community have convinced us that proximity to the Volker campus must be an essential element of the new facility,” said Chancellor C. Mauli Agrawal. “With that decision made, we can now move forward with a sharper focus to our planning and decision-making.”

Tate Berry, a freshman in the jazz studies program, expressed how important the proximity of the new conservatory is for some students’ schedules.

“A 10-minute window between classes should be achievable between two buildings, and the current distance between Olson and [other buildings] is already a bit of a stretch,” Berry said.

A Request for Interest (RFI) report issued this past June detailed the new site’s specifications.

“The conservatory will be a new or fully renovated 225,000–250,000 gross square feet facility for all proposals, with an associated 300 space secure and dedicated parking lot or structure,” the report said.

Agrawal stated the project developer will need financial and bonding capacity of $100 million, not including land costs.

Last spring, the General Assembly approved up to $48 million dollars in a promised 50-50 match of the money the university raised, but former Gov. Eric Greitens vetoed the bill.

UMKC promised to raise the additional funds on their own until a $20 million pledge from the Kauffman Foundation was withdrawn.

Although some are disappointed there will be no downtown facility, conservatory leadership and faculty believe the proximity requirement will improve convenience while maintaining the goals and vision of the new performing arts campus.

“Our vision for the UMKC Conservatory is that it remain a globally recognized provider of world-class teaching and creativity in the performing arts, competing with other top schools for the world’s finest faculty and students.” said UMKC Director of Public Relations John Martellaro. “In order to maintain that status – and our accreditation – a larger, more modern facility is mandatory.”