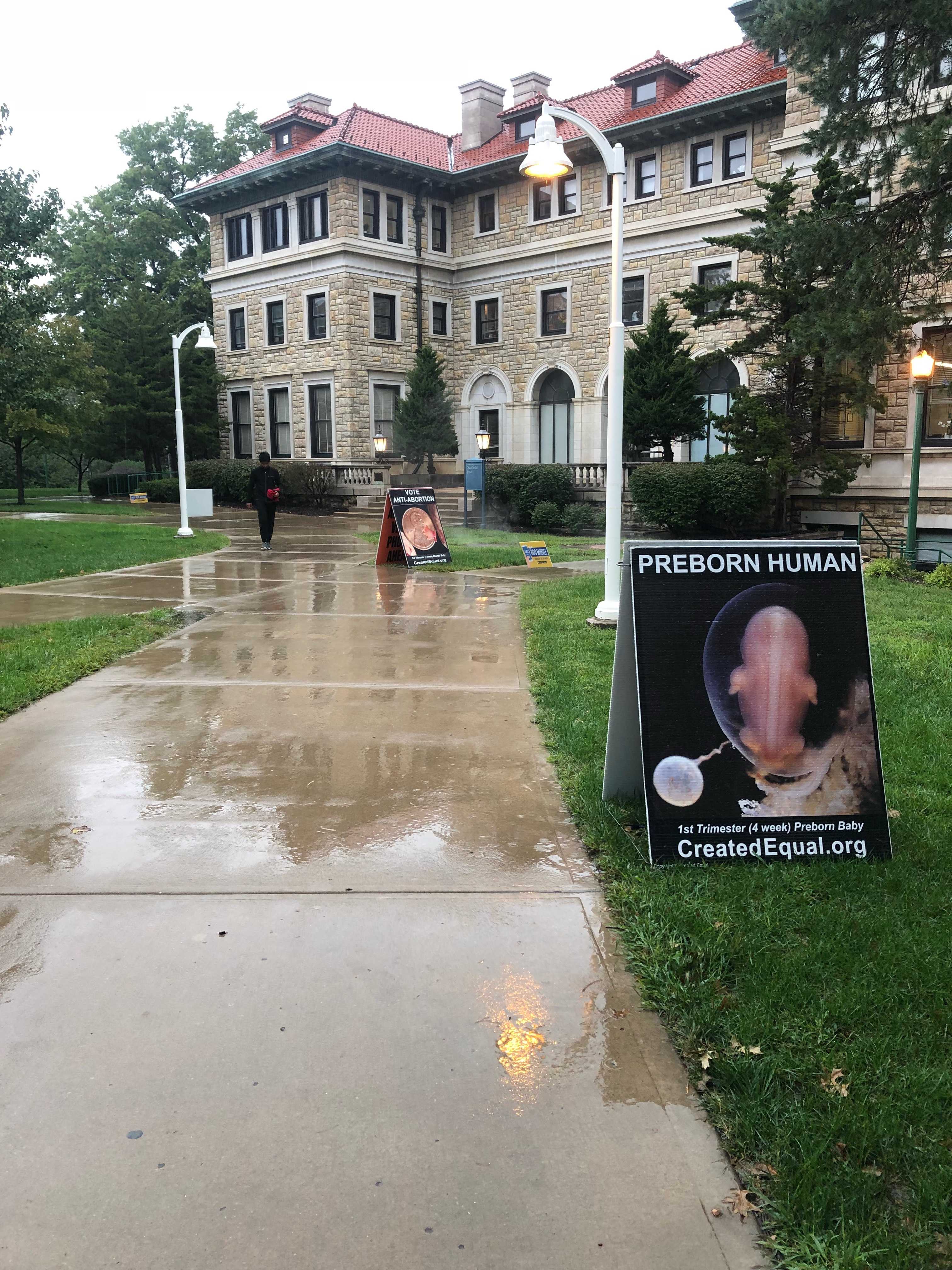 The dreary, cold weather may have kept some students from going to class last Friday, but it did not prevent one young woman from facing off with a traveling tour of pro-life demonstrators on campus.

As the rain fell, protesters from the anti-abortion organization Created Equal lined the sidewalks between Haag, Royall and Scofield Halls, with signs portraying graphic images of allegedly aborted fetuses.

Despite the stirring, controversial images they displayed, the members of Created Equal seemed genuine and approachable, offering pamphlets to the few passersby on campus.

The spokeswoman of Created Equal, a young woman named Evangeline, shared some details about the organization.

Evangeline said Created Equal has never been to UMKC before, but that the organization has attended a number of universities recently as part of what she called their “fall campus tour.”

According to the organization’s website, www.createdequal.org, members of Created Equal use “visual evidence and conversational tools” to present “the case that abortion is a breach of human equality they should oppose.”

“We use the generic label ‘abortion,’ but what is taking place is no benign medical procedure,” Created Equal’s website states. “It is the dismembering, decapitation and disemboweling of someone no less human than you.”

As the time passed on Friday, demonstrators were occasionally met with words of protest from people walking by.

One student, in particular, remained outside longer than others.

Walking amongst the demonstrators wearing a red jacket and wielding a microphone was Madison, a senior at UMKC who is studying geology.

She said that she decided to stay out in the rain and respond when she saw what was happening.

“I want women who have had abortions who might be passing by on campus to feel like someone has their back,” Madison said. “You can be on this campus, but so can I.”

She chanted phrases like “Women’s rights are under attack!” into the megaphone, only stopping when she was approached by campus police and asked to stop.

According to section 110.040 of the UM System’s Rules and Regulations, the use of sound amplification devices is prohibited at UMKC unless a student has received prior permission from the university.

In recent years, the Guttmacher Institute has reported that unexpected pregnancy happens more among people aged 18 to 24 and roughly 42 percent of unwanted pregnancies are terminated.

As she put away her megaphone, Madison continued to chant in protest.

Although she and Evangeline seem to share a passion for activism, the two young women did not exchange words.

The last names of Madison & Evangeline were excluded from this article by request of the interviewees.