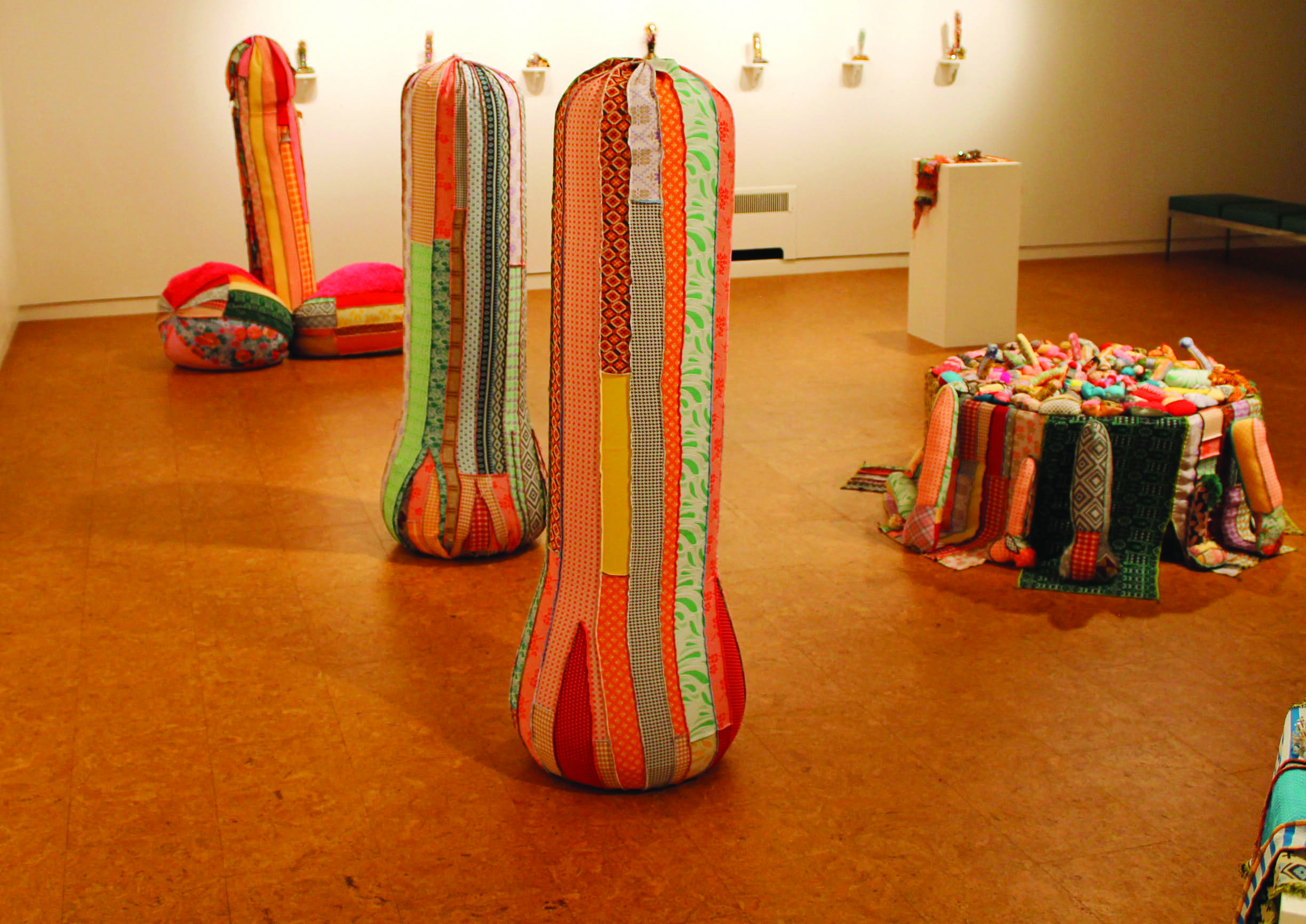 The UMKC art gallery opened its doors last week with its latest exhibition “Holly Polyester: Local Grandmother Quilts Giant Penises” by Holly Stewart.
Beginning as a fundraiser through Kickstarter, Stewart’s handcrafted polyester penis sculptures are a wonder to behold. Arranged around the gallery, the penises were crafted in a variety of sizes and materials. The stars of the show were the nearly four-foot tall penises on the gallery floor. Colored in patchworks of polyester and other fabrics, these pieces were attention-grabbing and expertly crafted with fine stitching and incorporated pom poms, as well as structures that allowed the penises to be pushed and then teeter back into place.
Stewart was just as open with her explanations about her work as she was with her work itself.
“I just wanted to apply the things that I do – the crafts, the techniques, and combine it with the thing that I think about, and be honest.”
Lining the gallery walls were smaller but more intense pieces, such as penises constructed of pins and small pieces of plastic. Colorful and exotic, these works bore certain symbolism and power.
“I Know it’s Not an Easy Battle” is a vibrant and active sculpture with the shaft appearing like a neon cactus erected high above a base, and is covered with glittery figurines of cowboys and Indians holding spears and rifles.
When asked about switching from textiles to these found object sculptures, Stewart said, “It’s one of the oldest crafts. My mom made Christmas ornaments with those Styrofoam balls – I can remember doing it while we were kids and they were covered in ribbons and other things, as well as these sequins you would put on pins, to make these really ornate Christmas ornaments.”
“So remembering that I thought, ‘well why I can’t have them be anything I want to?’” Stewart said.
Stewart anticipated the variety of responses she would receive from her work, and welcomes them as a freeing part of the process.
“One time while I was painting these and it wasn’t working out, I noticed I had some pins and foam core on my desk and added them in and brought it to my professor for critique, and he immediately said ‘That looks like a dildo,’” Stewart said. ”So I had to be honest about what I was doing because I was way more interested about putting the pins in the foam core than I was in painting.”
Stewart’s prior work history also influenced her exhibit’s work.
“I worked for a dildo factory in California and the company I worked for was one of the top dildo makers in the world,” Stewart said. “I admired the woman that I worked for and I thought, ‘Well, I’m not making dildos, but I can make important work that’s sexually related and sex positive.’”
The response from visitors on opening night was a mix of confusion, hilarity and astonishment, but the overall opinion seemed positive.
One former UMKC student said, “I really like them. I wish real penises looked like this.”
When asked about the decision to exhibit a collection of work such asStewart’s, Art professor and Head Coordinator for the UMKC Art Gallery said, “There’s been a lot of interest in this show coming from all walks of life. There are people coming from the nursing department and people who have a health interest in it, being images that are sex positive.”
“Then there are people coming from a feminist perspective, and largely those who are just curious. I think it’s got a lot of humor to it. We’ve had a lot of people looking through the doors gawking and taking pictures leading up to the opening,” Watne said.