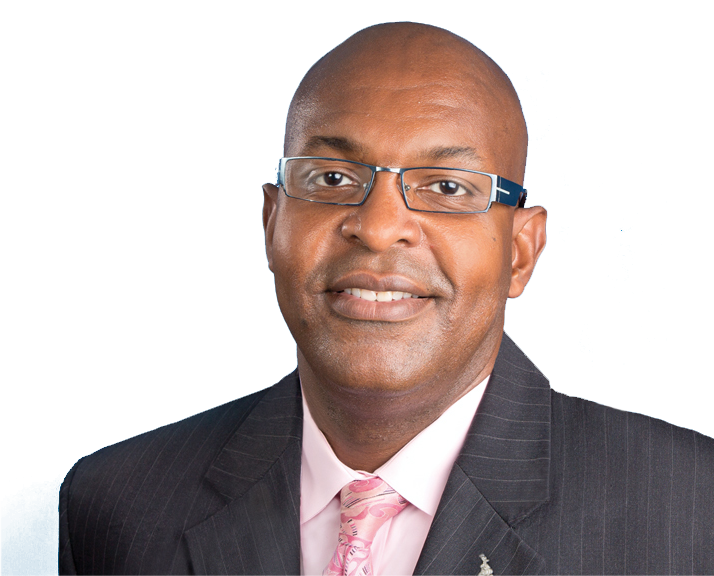 Starting off as a first-generation college student, Dr. Joe Seabrooks found his path to higher education purely on accident.  With aspirations to become a high school counselor turned principal, he entered UMKC with one life plan and came out with something unexpected.

“I can honestly say and look you in the eye, and tell you I am afraid to know what my life would be if I hadn’t chose UMKC,” he said.

Current president of Metropolitan Community College- Penn Valley, Seabrooks hasn’t strayed far from his alma mater. He enrolled in UMKC in 1989, joining the first Division 1 basketball team under the coaching of Lee Hunt.

Growing up in Atlanta, Ga., Seabrooks attended Benjamin E. Bannecker High School, with a predominantly black student body. .   Of the many prospective choices on his university wish list, UMKC became the starting point for his passion for higher education. “UMKC appealed to me because it was in an urban community and I needed, for my own personal growth, to get away from my hometown,” he said.

Seabrooks had a stress fracture during what would have been his first basketball season.  He took this as an opportunity to focus on his academics.

“I was the first of my generation to graduate after four years, which wasn’t typical of student athletes,” he said,” but for me, I was so naive that not graduating after four years was the equivalent of being kept back, so I was very serious and adamant.”

In addition to athletics, Seabrooks found comfort in other student organizations on campus. He was an active member of the African American Student Union and Student Government Association.  He also held a spot on the appropriations committee of SGA, now known as SAFC, the allocating body of funds to student organizations.

It was TAASU that offered Seabrooks  one of the most motivating experiences during his student years.

“The interesting thing about being on the basketball team back then, particularly the men’s basketball team did not have a good reputation as far as being students,” he said. “Quite honestly, I needed to disassociate myself with some of that reputation because I was a very serious student. The African American Student Union gave me that opportunity.

According to Seabrooks, the general membership of TAASU was one that supported each other in their endeavors to graduate.

“All of the things we did as a student union centered around us graduating,” he said. “At the end of the day, it made no sense for you to be involved if you weren’t planning on graduating.”

Seabrooks received his B.A. in psychology and wanted to immediately pursue his master’s in counseling and guidance. After his first year with that program, staffing limitations caused the program to go defunct.  Though his game plan had been negotiated, some advice from an unexpected source pointed Seabrooks in a new direction.

A roommate from his freshman year suggested to Seabrooks that he should consider trying a course in higher education-administration.  With financial support from the athletics department, Seabrooks decided to experiment.

“I’ll never forget Professor Richard Palm,” he said. “My first question to him was, ‘What is administration? What does that mean?’ That’s how basic of a level I was at, it threw him actually.”

Seabrooks completed the program, had a graduate internship through the university and found himself working full-time for the first five years of his career.   Through each phase through UMKC, Seabrooks found many colleagues and mentors.

“I had some of the most amazing professors,” he said. “Amazing people who really took care of us, but really challenged us. In my professional life, it’s those foundational experiences that gave me the confidence to do what’s right for the right reasons.”

His first job on campus was in university advancement as the coordinator for alumni and constituent relations.  With this role, he gained valuable fundraising experience through efforts to raise money for minority scholarships.

“So I got some experience fundraising, working with affinity groups,” Seabrooks said,” and during that time I was just so energetic that I saw there were some gaps in advising of student organizations.”

Seabrooks soon found himself advising several student organizations, which  he didn’t realize was rather unheard of at the time.  He served an adviser to TAASU, the Association of Latin American Students, the International Student Organization and the National Pan-Hellenic Council.

He was even able to point out a framed photo on his office wall of himself and one of his advised organizations at an SGA awards ceremony.

“We had a clean sweep– every award,” he said. “I think I won adviser of the year, student organization of the year, program of the year, all of the groups I advised won one of those awards.”

Seabrooks also had the fortune to serve as interim director of Multicultural Student Affairs, where he feels his career genuinely begun.

Before settling down at MCC, Seabrooks spent some time as assistant vice chancellor of students at University of Arkansas- Fayetteville.  He said the atmosphere was different from his alma mater.

“What they have at Arkansas that I’m starting to see us build here at UMKC is a respect and appreciation for tradition,” he said. “Some of their traditions you just can’t opt out of.  I see we’re going that way really quickly at UMKC. That makes me proud.”

Seabrooks said he is proud of  the new facilities on campus including the  Atterbury Student Success Center, the Student Union and the continual addition of new residential buildings on both campuses.  He is equally excited for the addition of Coach Kareem Richardson to the athletics department.

“I’m extremely excited about Coach Richardson’s arrival,” he said. “Coming from a national championship program tells me we are serious about being extraordinarily competitive and I’m looking forward to his leadership and how he helps those young men grow and develop.”

Seabrooks said alumni need to recognize that the knowledge they possess is courtesy of their alma mater.

“My life, the experiences that I have, are beyond my wildest imagination,” he said. “I never dreamt in a million years that I would be talking about my time at UMKC and what that meant to me. I owe a great deal to my institution.”