Turtles All The Way Down: A story about mental illness with the backdrop of a mystery 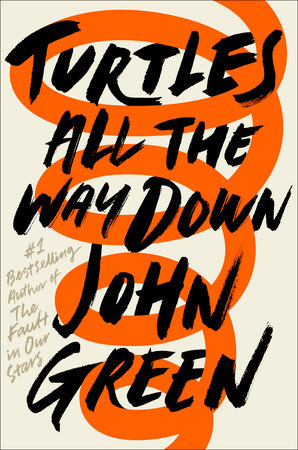 John Green’s book Turtles All The Way Down uses high school romance, friendship, loss and mystery as the backdrop to a story that takes a look into the brain of a 16-year-old girl suffering from obsessive compulsive disorder.

This story is about mental illness and delves deep into the mind of the main character, Aza Holmes. While we see many things happen in Aza’s life, the true focus of this book is on her inner struggle. We literally spend most of this story inside Aza’s mind.

Aza has a best friend called Daisy and the book opens in a high school cafeteria where Aza is experiencing a “thought spiral” as she calls it. Life is going on in the cafeteria as her friends try to engage in conversation, but Aza is trapped in her own thoughts. Daisy is a complete contrast to Aza, as we see Green subtly and effectively building the tension between them.

Aza is hopelessly lost in her own mind, and while her and Daisy share a sharp wit and a love for Applebee’s, Daisy is full of excitement for life and relationships while Aza is not. Aza and Daisy simultaneously complement and irritate each other.

The storyline starts with the mysterious disappearance of an Indianapolis CEO and billionaire, Russell Pickett. A reward is proposed for any clues as to where he is. Daisy is exhilarated by the idea of solving a mystery and getting a hefty reward. Aza knows Pickett’s son, Davis, and Daisy insists that they visit him. We see an instant connection between Davis and Aza. They have both lost parents and now Davis might be losing another one.

As the love story unfolds between Davis and Aza, we see that this is not a story about teen romance. Aza is still completely controlled by her compulsions and the story takes an unexpected turn. Green has spoken out about suffering with O.C.D himself and as the story progresses, readers will understand that this book is about learning to live with mental illness and how Aza finds herself in the midst of it. Green builds this theme in the first half of the book by introducing a few of Aza’s compulsions and irrational fears. She is deathly afraid of contracting clostridium difficile, an infective bacteria and is perpetually aware of her churning stomach as she pictures the bacteria spreading.

She compulsively cleans a small cut on her finger, which she has had since she was a child. She even goes so far as to drink hand sanitizer.

Green paints a dark and chilling picture with the way he writes Aza’s inner dialogue. It is a constant battle with herself. More often than not, she loses and is left feeling helpless and afraid. O.C.D, like many mental illnesses, is often misunderstood. Green does not shy away from showing all of it. He does not sugar coat the intense fear and loneliness that Aza feels.

Aza reminisces on her childhood before her illness had taken hold.

“Back then, all emotions felt like play,” she thinks, “like I was experimenting with feeling rather than stuck with it. True terror isn’t being scared; it’s not having a choice in the matter.”

This book starts off slow and there is little outer conflict until the end. This sort of structure may not be for everyone. It is extremely insightful and reflective but could be difficult to get into at first. Some of the characters in this story lack depth and description. Readers don’t really have a choice of what character to latch onto. We are stuck with Aza.

We get some glimpses into the characters of Daisy and Davis, but readers will have to wait until over halfway through the book to really connect with anyone besides Aza.

Personally, I didn’t have a problem with this. Green’s intent is clearly to get readers to try to understand and, possibly, relate to Aza. Aza is trying to solve her illness with medication and visits to her psychiatrist but is feeling hopeless. “It’s so weird, to know you’re crazy and not be able to do anything about it, you know?”

She portrays her ongoing frustration, “It’s not like you believe yourself to be normal. You know there is a problem. But you can’t figure a way through to fixing it.”

Aza eventually realizes that she must accept herself and learn to see herself outside of her thought and actions because it will never be easy. This is the theme that Green leaves us with. It’s not just a struggle for those with mental illness, but a universal, human struggle.