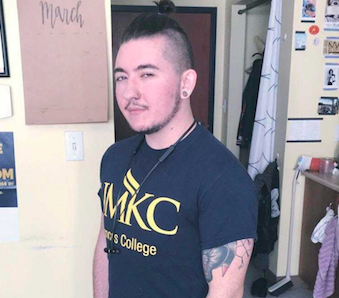 Kole Keeney was walking down a hallway in his high school when he heard it.

It was a seemingly ordinary greeting between two guys, but it meant much more to the high school student.

It was his junior year, and Keeney had come out as transgender just a few months prior – June 1, to be exact. He’d had it planned since the beginning of his sophomore year.

The hormones he was taking hadn’t had much of an effect yet. His peers were still adjusting to the change, getting used to calling him by his chosen name, Kole.

While some at school rejected his new identity, others were more accepting, much like the 6-foot-5-inch epitome of a country boy who greeted Keeney with male terminology and a high five in that hallway junior year.

At home, he had his mother’s support. She did her own research and joined groups to better support her son. His closest friends, though apprehensive at first, welcomed the change and called him Kole long before anyone else.

Keeney made a Facebook post to come out to the rest of his small Harrisonville, Missouri, community. Scared of rejection, mainly at school, that moment in the hallway felt pivotal.

“It really resonated with me and made me feel validated for the first time,” Keeney said, adding that the gesture “stuck with me and instilled a lot of confidence.”

Keeney, now a freshman at UMKC, has come a long way.

He chose to attend UMKC because he recognized it as a “safe and accepting place for all students,” a place where he could feel comfortable and be open about his identity.

And that choice has paid off. A computer science major with two minors in political science and mathematics, member of the Honors College, active member of the Trans+ Social Group and the SGA representative for the LGBTQIA Affairs Council, he’s about as involved on campus as possible.

“I feel as if I finally have opportunities to not be held back and to flourish,” Keeney said. “I’ve been very lucky to be able to advocate and represent the communities I’m proud of and to have the support I do from so many places.”

He credits Jonathan Pryor, assistant director of LGBTQIA Programs & Services, as “the best resource and support” he’s ever had, and he hopes to help expand many of the services Pryor has helped create during his time at UMKC.

Keeney has found comfort in places like the Rainbow Lounge, a safe community space on campus that provides information and opportunities for LGBTQIA students.

“It can be very scary to navigate, but this campus is really a very accepting place, and there’s many people ready to help,” he said.

With this immense support comes downfalls, however. Keeney has experienced his fair share of micro-aggressions on campus, and feeling comfortable in the right bathroom is sometimes touch-and-go.

More concerning, though, is a student that frequently outs him in social situations, most notably among a group of other male students on Keeney’s first day living on campus.

But Keeney embraces these difficulties and understands that conflict will always exist, much like the internal conflict he lived through for much of his life before transitioning.

Growing up a “tomboy,” he said, Keeney “absolutely despised anything feminine.”

In preschool, he received a baby doll during a gift swap, and, upset and jealous of the toys the boys in his class received, he completely destroyed the doll.

This jealousy he later understood was contributing to his gender dysphoria, which, by the age of 13, had gotten so bad that he couldn’t look at himself in mirrors.

Depressed, unsure of himself and his feelings, he started doing research, and it took him two years to finally conclude that he is transgender.

“I secretly bought my first binder, cut my nearly two feet of hair off and slowly presented more and more masculine,” Keeney recounted of the beginning of his transition.

Now, he couldn’t be happier.

With the support he’s found at UMKC and from his family and friends, Keeney is able to work with the school, he said, to “continue making our schools more accessible and accepting.” He and others in the University of Missouri system have suggested ideas concerning pronoun usage and gender-neutral bathrooms on campus.

His motivation for this kind of work is clear, reminiscent of his own struggles as he began his transition years ago: “I just want it to be known to students out there who may be struggling or questioning their identities that they are valid.”