The Real Danger of Right to Work Laws 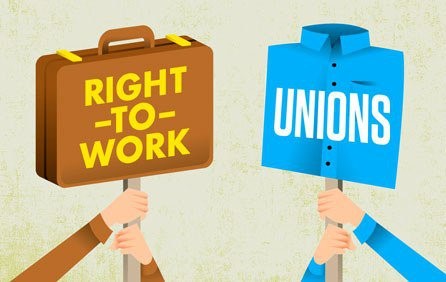 This year, more than half the country’s workforce will be living in “right to work” states. The tipping point will be Missouri’s own right to work legislation that takes effect this August.

Right to work legislation prohibits unions from requiring that dues or fees be paid by all employees that it represents. This usually has the effect of weakening labor organization, as unions will have less financial power to fight for higher wages or benefits such as health care. Additionally, so-called “free riders” can take advantage of the workplace protections and benefits without contributing to the unions that acquire them. Conversely, proponents say that job growth increases because businesses prefer to operate in states with right to work laws.

Data can usually be spun by either side to support or reject the claims of the other. There is no firm consensus by economists or statisticians on the effects of right to work, as it cannot be easily isolated from other factors such as variable standards of living or the economic recovery following the recession. In general it increases job growth and in general it decreases wages, all usually in tandem with other pro-business and anti-labor policies. This is a subject where hard, unbiased data is scarce and so the debate devolves into opposing ideological and political arguments. Therefore, right to work legislation probably makes less impact as an economic policy than it does as a political call-to-arms.

The new Missouri state administration was elected in part because of their right to work platform and is now using the momentum to further limit the power of labor movements. According to a report by the Kansas City Star, new legislation is being introduced to the State Congress that would prohibit Kansas City from raising the city’s minimum wage above the state’s minimum wage of $7.70 an hour.

Unions can still survive in right to work states. Nevada is an example of a state with a thriving labor movement despite having right to work laws on the books since 1952. The slogan “right to work” is certainly clever branding, and the left has so far failed to come up with an equally politically charged catchphrase to oppose it. Therefore, its true danger to labor is in inciting political will to elect those with an interest in supporting big business. It also attracts those businesses’ donations, an example being Joplin magnate David Humphrey and his multi-million dollar contributions to pro-right to work candidates.

It is easy to rally behind a fight for the “right” to do something, but in 1961, Martin Luther King Jr. warned against taking the term at face value: “In our glorious fight for civil rights, we must guard against being fooled by false slogans, such as ‘right to work.’ It is a law to rob us of our civil rights and job rights.”