The Awakening will keep you on the edge of your seat

The Awakening, currently available on Netflix, premiered in August of 2012. The movie currently holds strong at four stars on Netflix, and lives up to its hype. Director Nick Murphy has produced a horror movie that makes viewers piece together the plot and leads up to a mind-blowing ending.

Set in England 1921, the film follows lead character Florence Cathcart (played by Rebecca Hall) in her attempt to prove that a ghost at a local all-boys boarding school is a hoax. After the death of her lover in WWI, Cathcart has spent her professional career hunting down the supernatural and disproving it using science. Her logical mind and cunning wit are what attracts Robert Mallory (played Dominic West), a history teacher at the school. A boy died at the school after seeing a ghost child, and the rest of the young elementary aged boys can no longer function with the thought of another ghost walking among them. As suspense toys with the viewer, no such ghost is found. Once Cathcart proves that there is indeed no ghost, only mischievous little boys causing trouble, the movie get interesting.

Something seems to come over Cathcart – a sort of weariness that contradicts her usual confident personality. Though the boys are no longer scared and the school is at peace, she is not. This change becomes apparent when Cathcart goes out onto the dock for a smoke. A corpse-like hand reaches out of the pond towards her, and she faints and falls in. Mallory, the history teacher at the boarding school, saves her and then listens to her completely illogical rant about the supernatural. After more sighting of unexplainable beings Cathcart sets up more traps and devices in order to prove to herself that the dead do not walk among us.

Cathart trips over her own traps. Nothing, no picture evidence though she swears there was a man with a gun pointing it at her. The only sign of afterlife is a young boy standing in the background of each photo. As Mallory and Cathcart uncover the photos together the pair decides that finding a ghost is a valid reason to have sex.

After their momentary moment of love, Cathart decides it’d be a brilliant idea to take a walk outside, where the sketchy groundkeeper is. After watching Cathart and Mallory’s fiasco, he wants a part of the action and attempts to rape Cathart. With help from a member of her past, Cathhart manages to kill him with the butt of his own gun.

All this excitement leads to the mind-bending moment where the mystery of Cathart’s past is discovered and the viewer’s brain explodes with that long awaited “Ah-ha!” moment. This isn’t your average scary Friday night cuddle horror movie. The Awakening uses suspense to highlight its crafty plot. 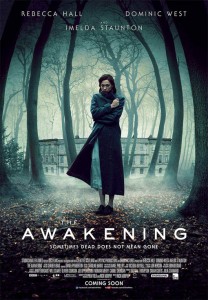 Previous articleDrinking Dangers
Next articleBlue Mondays not so blue after all