The Art of Thinking on Your Feet 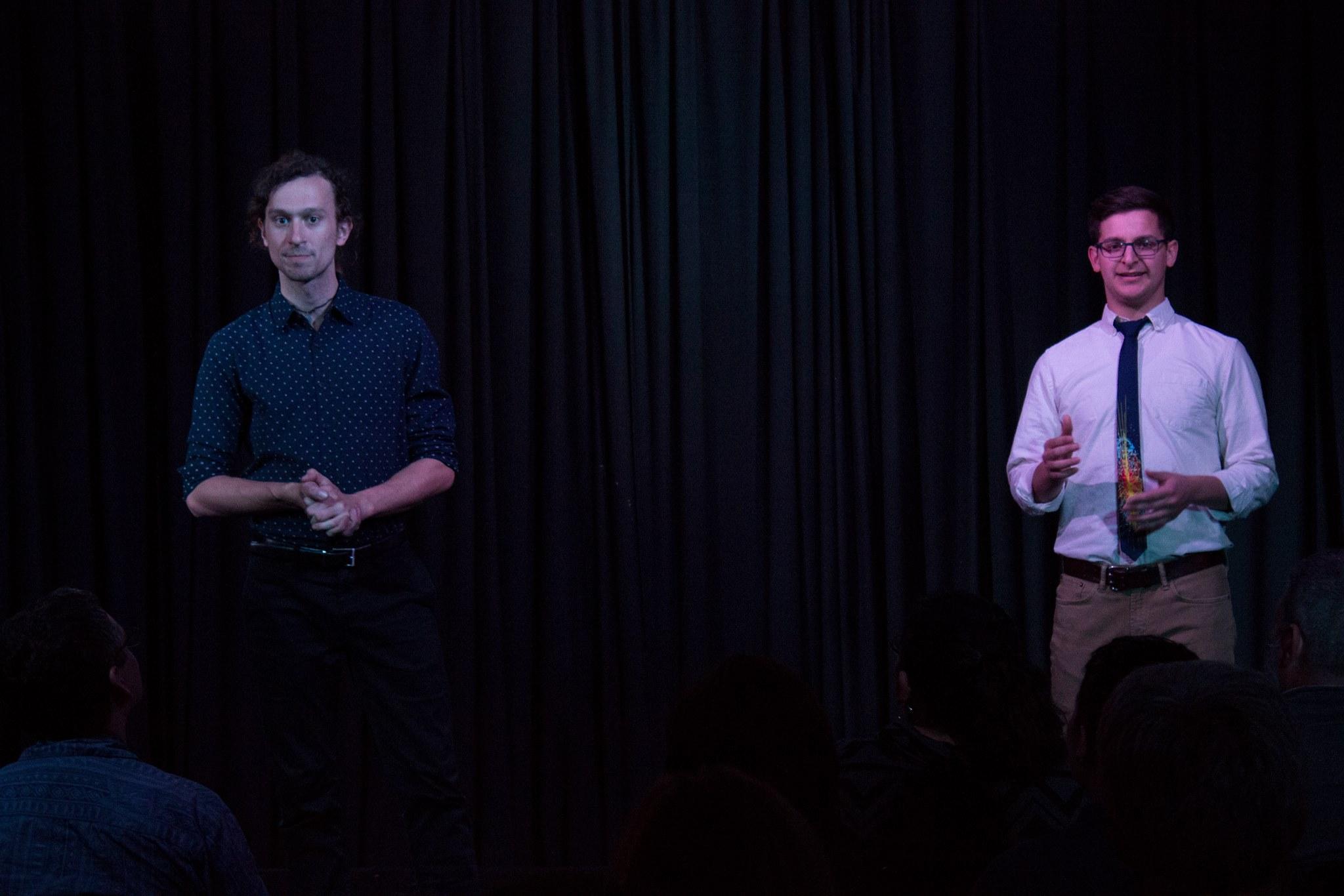 Finding your way to the weekly improv shows in Westport can be difficult for first timers.

Upon reaching the address of The Kick Comedy Theatre, it appears to be nothing more than a small coffee shop. The practiced show-goer walks into the shop and heads down a corridor that looks like it’s for “Employees Only.” Opening a door into semi-darkness, they head down the stairs and suddenly find themselves in the intimate performing area.

Here, on a Friday or Saturday, Christopher Steinauer, 29, can be seen acting like a gorilla, mothering, answering unplanned questions, being killed, and more.

Playing a different character every single week is already a challenge, but the real kick is that Chris can’t prepare for any of it. It’s improv.

“Improv is short for ‘improvised performance,’” Steinauer explains. “So the term is a pretty wide umbrella, but typically if you’re going to see improv, it will be some kind of live improvised comedy wherein performers may invite an audience to participate by offering suggestions to initaite comedic scenes or games for the performers”

Steinauer has been a member of The KC Improv Company for a couple years. They appear most often at Kick Comedy Theatre, but Steinauer also performs for various venues in Kansas City.

“My first exposure to improv was a single show in high school,” Steinauer said. “My first performance was rough, but goofy and fun. We were twelve total high schoolers, the funniest in our respective classes, just out there trying to make everybody laugh. It went well, but like all high school life events, I’m sure I’d shudder if I could see it again.”

With a pleasant first experience under his belt, Steinauer decided to keep at it. During his time as a student at Truman State University, Steinauer explored the form of improv more deeply and performed for four years.

“The biggest challenge for me was grasping a lot of the stories and rules,” Steinauer said. “When I though I learned how to perform well, I quickly learned the learning was not over. There is always something to practice, think about, discuss, and refine.”

One of these aspects continues to be especially tricky for not only Steinauer, but improv performers in general. Bear in mind, these actors have no knowledge of their role or that of their peers’ ahead of time.

“The most difficult aspect of a performance, for me, is typically letting go of what I might selfishly want to happen in a given scene or game,” Steinauer said. “For example, I may enter a scene thinking I’m a gorilla, but if my scene partner identifies me as a hiker, then, if I’m doing good improv, that gorilla hunch becomes the weight of a backpack and my grunts become how I express my exhaustion.”

As Steinauer mentioned, improv is an umbrella term and doesn’t pertain to one kind of plot, or a specific way of acting or character portrayal. In fact, Steinauer and a friend have recently come together to collaborate as a duo for a unique spin on improv.

“A favorite memory of mine was the first time I performed with my friend, David, as our duo,” Steinauer recalls. “We both combined our love of improv and science education and it was so great. I’m lucky to get to relive that memory pretty frequently.”

Steinauer wears many hats both beyond and within the improv community. This past year he added yet another.

Combining his knowledge of improv and his experience as a science educator in yet another way, he now works as an improv instructor.

“I hope my students take what they struggle with, try, and learn, into their lives off-stage too,” Steinauer said. “Of course, I hope they fall in love with improv and continue to grow, but if they become better listeners, more present in situations, and more inclined to work together than on their own, then I’ve helped them put a lot more goodness in the world and that is always rad.”

Steinauer has come a long way since that first improv performance in high school, but the satisfaction of delivering spontaneous entertainment has never wavered.

“I love performing and creating something imagined with others,” he said. “It’s so exhilarating and fast and fun and wonderful. There is no feeling like creating a world, showing it to an audience, then abandoning it and creating a brand new one all over again.”

Previous articleWhere Can I get a Drink Around Here? | Top 5 Bars in KC
Next articleTotal Eclipse of an Evolving World