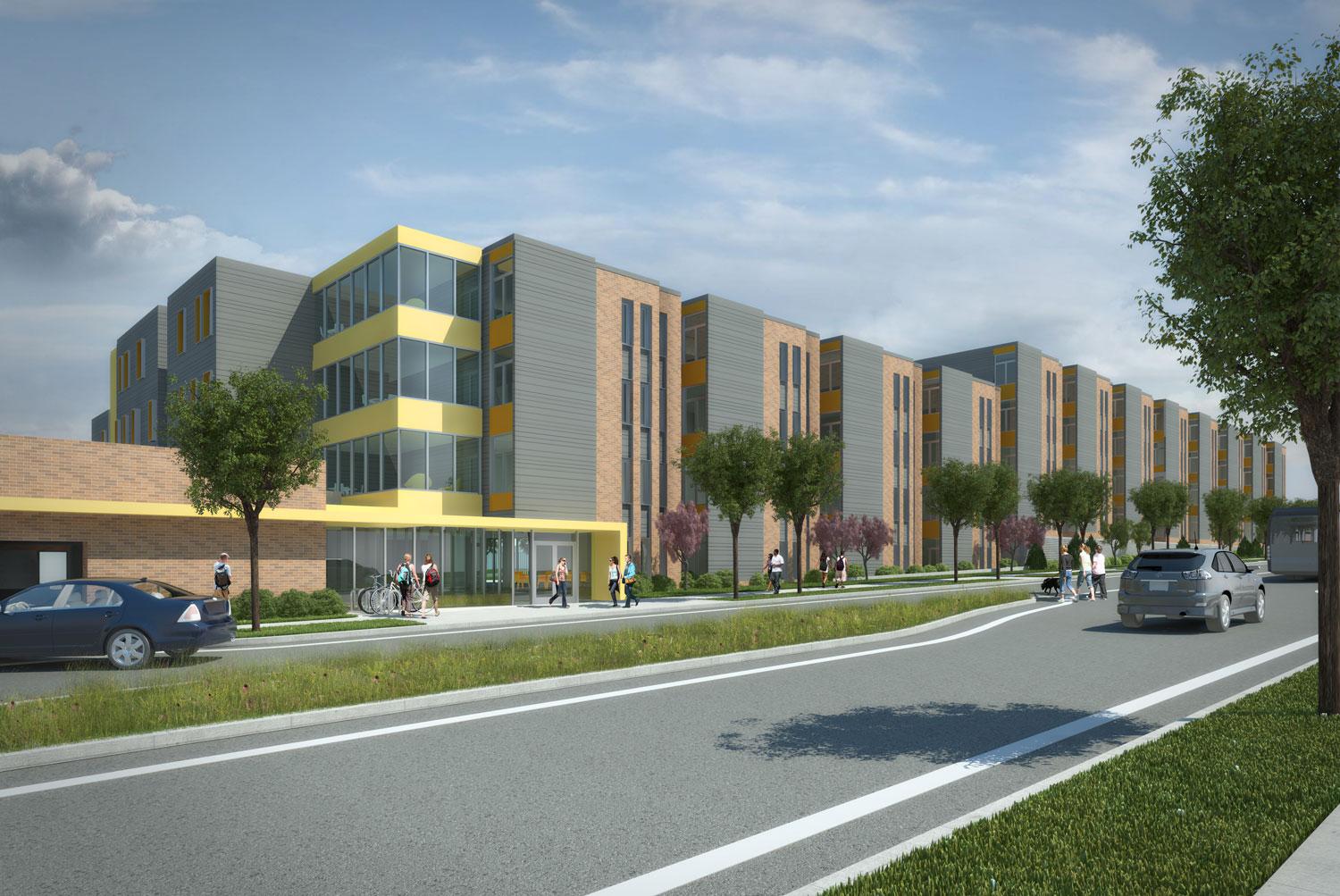 The first residence hall and only student housing option on the Hospital Hill campus is in its second year of operation at 70 percent capacity.

The Hospital Hill Apartments provide affordable housing options for students in the health sciences schools. However, the apartments are open to any second-year students and above of any major. The residence hall houses up to 243 students and an adjacent parking structure features 196 spaces.

“Our occupancy is growing steadily.” said Residential Life Director Sean Grube. “We opened this year at approximately 70 percent and we plan to increase that to near 100 percent in the next 2 to 3 years through targeted marketing efforts. Based on our occupancy levels as well as the market survey completed before construction, there are no additional construction projects planned at this time.”

According to Grube, half of the residents at the Hospital Hill Apartments are Health Sciences majors. The other half complete the majority of their coursework on the Volker campus but choose to live on Hospital Hill.

“Students with Volker-based majors have told us they like living closer to downtown, and enjoy the convenient transportation between campuses,” Grube said. Students have access to both the KC Metro and the campus shuttle.

The Hospital Hill Apartments are modeled after Volker Campus’ Oak Place Apartments and feature one-, two- and four-bedroom units. The new housing structure has met students’ requests for more one-bedroom units as expressed in a market survey completed before construction.

“When the market survey was completed, students told us that they wanted more single rooms,” Grube said. “Hospital Hill has 33 single apartments, whereas Oak Place apartments on the Volker campus only has seven single apartments.”

Each floor plan includes a furnished living room that has a couch, coffee table, bar stools, entertainment center and a kitchen with a refrigerator, dishwasher, oven and a washer and dryer. Each bedroom has keyed entry, a full-size bed and a private bathroom.

“I have everything I need at the apartments,” said resident and fourth year medical student Morgan Warren.

One-bedroom, two-bedroom and four-bedroom units average $974, $882 and $774 per bed, per month, respectively. Rent is equivalent to the Oak Place Apartments and includes fees for internet, cable and all other utilities.

“The apartments are convenient because it’s so close to the School of Medicine and the bill is all-inclusive and combined with the school bill, making things a lot simpler,” Warren said.

“We have to generate all the revenues to run and maintain power and electricity through rent,” Eric Grospitch, Dean of Students, said in a 2013 interview with University News. “There are no state dollars that go into this. It is all funded by students who choose to live there. Our occupancy is very important. We need to keep it at a decent level, but it also means we need to keep the rents reasonable in order to do that. A student who does not live on campus pays nothing for campus housing.”

Despite their best efforts to make the price more reasonable, some students feel it is not worth the loss of freedom that goes with living in on-campus housing with RAs and rules.

“I would rather find somewhere cheaper to reduce my potential debt and something I could call home,” Warren said. “I don’t feel like I’m at home here. Despite their best efforts to simulate an apartment, I feel like I’m still in the dorms. I don’t want to live under other people’s rules anymore, be it my parents or campus housing.”

The Hospital Hill apartments attempt to accommodate the extra amenities one might have in an off-campus apartment by providing a fenced-in courtyard, outdoor seating and grilling areas for residents. In addition, a new 1200-square-foot fitness center in the main lobby of the apartments is available to both residents and students, run by Swinney Recreation staff. The fitness center is accessible to non-resident students with a school ID.

“The fitness center is utilized by both residents and non-residents,” said Grube. “Swinney reports that there was a significant increase in usage once the fitness center moved to the Hospital Hill Apartments. Swinney estimates that Swinney on the Hill has a monthly attendance that rivals the annual attendance at the old Annex.”

“It’s nice to be able to run across the street for a workout after a long day in the hospital instead of drive down to Volker campus,” Everson said.

A lit walkway extends from the residence hall to the Hospital Hill campus. Additional safety features include security cameras to ensure student safety, access-card entry for residents to both the parking structure and the apartments and a UMKC police substation.

“I feel safe despite the stereotypes of the area,” Warren said. “Police regularly patrol the area, the building itself is card access only, and there’s always someone at the front desk to monitor people coming and going. Along the path between the apartments and the School of Medicine there are these stations to alert the campus police, if something happens.”

“Information provided to us by KCPD prior to the opening of the facility indicated that the 24th and Troost area is as safe or safer than Volker campus,” Grube said. “We have not had any safety concerns or incidents that are different or more significant from our other properties. The association of the Troost corridor with crime is an unfortunate one, but not one that really fits with the area in and around Hospital Hill Apartments. The apartment complex is surrounded by long-term residents with a great community. We are happy to be a part of such a great neighborhood and be located near such a vibrant community.”