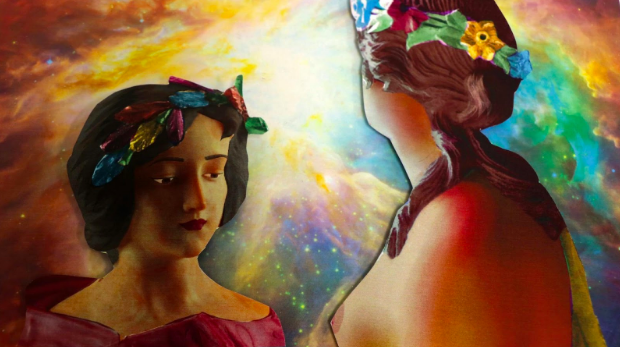 “Being a student filmmaker, validation like this brings a boost of both confidence and legitimacy,” Rose said. “Though awards are not what give me the passion to create, they make me feel content knowing my work is being seen and enjoyed.”

Rose’s film, “My Sappho,” is a short stop-motion documentary about Sappho, the legendary lyric poet from Lesbos, near Greece. The story is told through English translations by Rose, who directed and animated the film.

Rose animated flowers and paper cut-outs of art she digitally colorized. She spent over 48 cumulative hours in the studio bringing the story to life, doing voice-over, singing and music composition for the film.

“I have had the ability to experiment with all different modes of filmmaking,” Rose said. “Creating “My Sappho” was a largely isolated process—mostly me toiling away in the studio animating or recording. And I’ve also had opportunities to collaborate with peers on new live-action projects, and that’s been really exciting, too.”

“The final line of my film is Sappho saying that ‘Someone, somewhere will remember us, I swear,’” Rose said. “I wanted to do my part in sharing the vibrant life and words of Sappho.”

Harris’ film, “Wildflower,” is about a young girl who, inspired by a popular activist, becomes a climate-change enthusiast and discovers that “Her hero is not everything she hoped he would be.” Harris made the film for the 48-Hour Film Project.

“Basically, you get assigned a genre, prop, character and line of dialogue, and have 48 hours to create an entire short film,” Harris said. “It is crazy and stressful and super fun.”

In addition to the Bison Film Festival, “Wildflower” was screened online at Kansas City Film Festival International and the Heart and Soil Earth Day event. It is currently scheduled to be screened in-person on June 5 at the First Friday Film Festival.

“I feel so honored to be recognized,” Harris said. “So many great films by amazing filmmakers were shown at the festival, and I’m so honored to have even been considered amongst them.”

Harris plans to use her prize money from the festival to help fund her next short film, which she has written and will produce and direct as soon as it is safe to do so.

“I’m currently in the process of deciding if I should move to Los Angeles or New York City to work in the film industry elsewhere,” Harris said. “Hopefully, I can learn as much as I can about filmmaking and bring that knowledge back to KC in the future to help further grow our film community here. I am also working on polishing up two feature-length screenplays that I would love to see made into films eventually.”