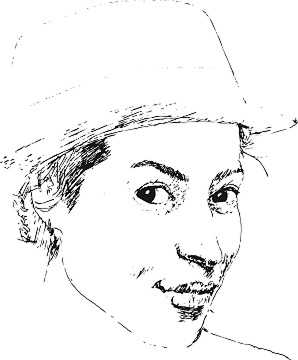 Wearing a white sweater, jeans and sneakers, Frohman carried a particular brand of swagger that was felt as she effortlessly rattled off her poetry.

She was not discouraged by the small audience, either. Frohman told everyone in the audience to sit at the front so she could give them a “more intimate” performance. Frohman, who encourages audience participation, was cheered by the group of high school girls who had come out just to see her, speaking to her internet fame.

The first poem of the night was written for Muhammad Ali.

“When I learned his story about how he used his platform as an athlete, I really found resonance and similarities in terms of my own story,” Frohman said, speaking of Ali’s Civil Rights activism. “What does it mean for me, as a non-black man, to find resonance in his story?”

Frohman was inspired by Ali, whose given name is Cassius Clay. Ali dumped this “slave name” in favor of a name that reflected his Islamic religious beliefs.

“This poem is about the power of naming yourself,” Frohman said. “To me, Muhammad Ali represents what it means to have integrity when it’s inconvenient.”

Though identity plays a large role in Frohman’s work, she does not want be pigeonholed as one specific thing.

“Sometimes people will find YouTube video of me and get locked into that video because it speaks to their identity,” Frohman said. “I get it. I fear and am concerned that that is the only conversation they want to have.” Frohman wants people to see all of her, and consequently engage with all of the topics she speaks about. Those topics range from LGBTQIA issues, to women’s issues, to Latino issues to matters of education.

Another poem was based on Frohman’s experiences as a program director for the Philly Youth Poetry Movement, touring the high schools of Philadelphia.

“What I noticed when I walked in was that all the schools looked like prisons,” Frohman said. “All of them had metal detectors when you walked in, and police resource officers greeting you at the door. As an adult, I knew what that did to me. It did not feel like a place of learning, it did not feel like a safe place to be. Our schools are second homes and sometimes first homes for our young people to go to when their home are not safe or validating their experience.”

It’s clear that Frohman values education, but she believes that it doesn’t always happen in a classroom.

“[UMKC] is not just a place of learning, but so is your mama’s kitchen,” Frohman said.

Throughout the performance, Frohman name-dropped some of the writers who influenced her work, including Zora Neale Hurston and Audre Lorde. With poet Dominique Christina, Frohman is part of spoken word duo Sister Outsider, which takes its name from Lorde’s book of the same name.

Frohman’s performance was part of Pride Month, which lasts all April. In addition to LGBTQIA Programs and Services, the event was sponsored by the College of Arts and Sciences; the Department of Foreign Languages and Literatures; UMKC Latino/Latina Studies; The Division of Diversity and Inclusion and The Bernardin-Haskell Lecture Fund.