‘Simply Breakfast’ is exactly that 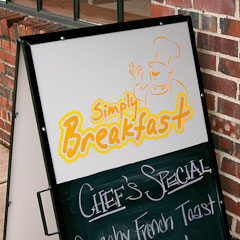 With a self-explanatory title, Simply Breakfast on at 4120 Pennsylvania lives up to its name.

The brightly colored walls and open-floor layout create an inviting atmosphere, as well as the cordial attitude of the staff.

Looking over the menu, I felt slightly stifled at the small amount of meal choices, yet of course there is always the possibility of adjusting to fit the food-mood of the day. I decided to avoid the order-exactly-what-I-want approach and go straight for the Eggs Benedict.

The prices were decent; Eggs Benedict was $6.99, and nothing else was over $9. There were many drink choices, from smoothies to specialty espresso-based drinks, yet I decided to stick with some good ole’ coffee

The ordering process was somewhat confusing. After arriving and stepping up to the counter, I ordered and was given a table number. The staff member kind of just left it at that; I wasn’t sure if I was supposed to go to a specific table or wait for him to bring napkins and silverware.

Eventually, after about five awkward seconds, I realized that all the necessary table fixings were to the right of the register, near the drinks. The coffee was something that I too was supposed to grab at my own leisure. Though awkward at first, I realized that this was the way I prefer it; to collect what I want and be on my way.

After finding a table close to the big airy windows, I sat down and examined the original photos of local spots positioned on the nearby wall. Finally getting my artistic fill of these photos, I then chose the window to look out of as I waited for the meal to appear. This was probably a mistake, because the windows were not exactly pristine. But before I let my mind wonder too much to wondering about the condition of the kitchen, the food arrived.

The Eggs Benedict came with a side of hash browns, which unfortunately, were not completely cooked in some sections, and burnt in others. So, I suppose I could say that they were slightly crispy – in some sections. The meal, in all, was average. Nothing too special. However, the coffee was tasty and hot, so I tried not to let the entirety of the early afternoon be wrecked by the food.

Perhaps these issues arose because I arrived about 45 minutes before closing, but as I was clearly still eating, the staff member who took my order came up and asked if I wanted my plate taken. Obviously, I was not finished. But I’m sure he had had a long morning, so I let it slide.

Before walking out, I thanked the staff, which kindly responded. Simply Breakfast was somewhere I would go again. However, I may save it for more of a 2 a.m. destination.