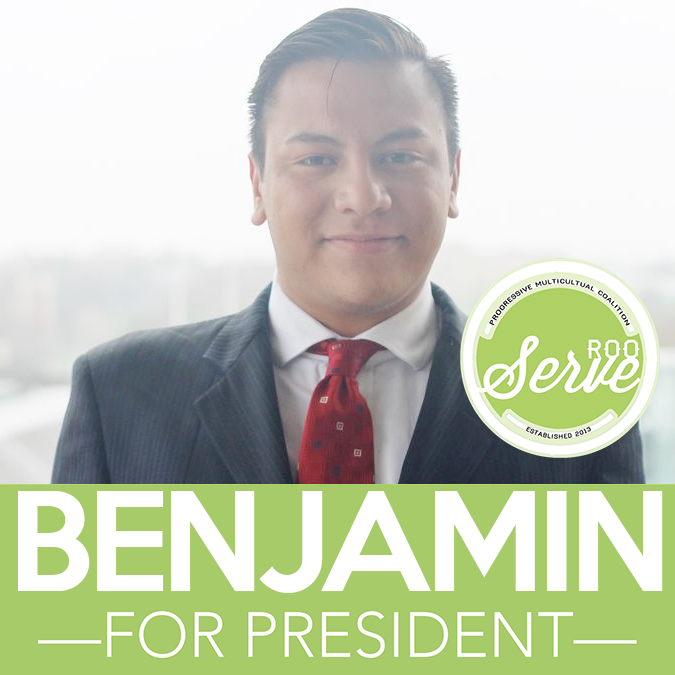 Junior Ben Campero, who led the Roo Serve slate, has been elected president of the Student Government Association for 2013-2014.

“Ben knows first-hand that leaders lead by serving,” Campero wrote in his candidate’s statement, “and in order to be a true leader one must first serve and give to others.”

According to Campero, around 1,300 students voted.

“The election was not just a matter of votes,” campaign manager Caleb-Michael Files said. “It was a choice for a new, fresh and alternative vision that includes participatory democracy where every student is represented.”

Campero added, “We hope to bring a positive campus climate that is safe, inclusive, robust and comfortable for all students.We hope to foster a community of inclusion that supports all of our student organizations, bring transparency and formality to SGA and SAFC, and  make sure every student voice at UMKC is well represented.”

Transparency has been a major theme for Roo Serve.

“We believe that transparency at all levels will help to ensure the integrity and accountability of our student government,” Campero said. “We intend to foster inclusive practices by hosting Town Hall meetings.

“Additionally, we will meet individually with each senator periodically to make sure that everyone feels his or her voice is being heard.”

Maslanka’s statement promised that an online scheduling system will be instituted in order for students to schedule 15-minute meetings to discuss any concerns or shortfalls with the executive staff. Also, she said that video footage of all SAFC, senate and town hall meetings would be publicly available.

Campero reiterated his slate’s plan to reshape the culture on campus.

“We think that there are many avenues that have not been tried to bring together our campus and produce a broader campus community,” he said.

Campero gained experience in promoting various aspects of culture through his years of involvement in the Association of Latin American Students. Campero currently serves as ALAS president emeritus.

Campero also serves as an international student ambassador as well as a student assistant at the International Student Affairs office.