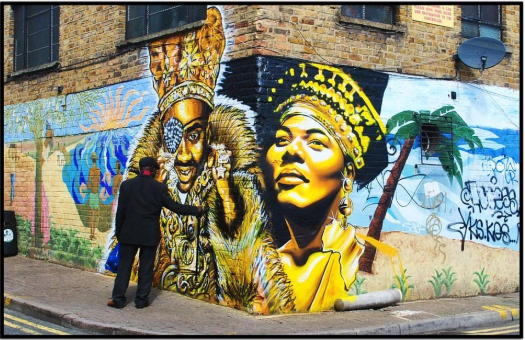 Hip hop emerged in the early 1970s and changed what people knew as music. When DJ Kool Herc began scratching records, it enticed everyone who heard. It was different, cool and new. Hip hop is now the most-streamed genre in the world.

At first, hip hop was all about storytelling and getting the message to the youth, as you can hear in “The Message” by Grandmaster Flash and the Furious Five. Though it originated in the 70s, it wasn’t until the middle of the 80s that women really got into the genre.

As the genre expanded, the space for women seemed nonexistent. The songs were getting more derogatory and misogynist in context. These sentiments made people sexualize black female rappers, but they combated this through song.

Cheryl James and Sandra Denton, later to be known as Salt-N-Pepa, signed to Next Plateau Entertainment in September of 1985. In 1986, their album Hot, Cool, & Vicious came out, and the single “Push It” went platinum.

Salt-N-Pepa’s music was open, and they talked about what many black women face in music and society. They spoke out against discrimination and violence towards women and took power in their sexualities.

They were the first female rap act to go gold or platinum. They have released five studio albums in total and have received a Grammy, three MTV Video Music Awards and a Soul Train Award. Many people know them as “The First Ladies of Rap”, which inspired and allowed other women to break into the scene.

In New Jersey, Queen Latifah, born Dana Owens, released her debut album All Hail the Queen in 1989 when she was only 19 years old. It produced her hit single “Ladies First.”

Her third album, Black Reign, was her most successful album. The single “U.N.I.T.Y” went on to win a Grammy. Many feminists supported Queen Latifah because her songs were empowering. She often rapped about women being disrespected by men and called out male rappers and hip hop culture.

Of course, her legacy doesn’t end there. She starred in dozens of movies and released seven studio albums. She also starred in Living Single, as Khadijah James, who was a journalist.

Melissa “Missy” Elliott has been working on music since 1991. She grew up singing in her church choir and performing for her family. She wasn’t recording her own music at first. Missy put together a girl group called ‘Fayze’ that ended up getting signed by Jodeci group member DeVante Swing, who also produced music.

Missy Elliott and her neighborhood friend Timothy Mosley, later to be known as Timbaland, worked together and produced tons of chart-topping records including Mary J. Blige’s album My Life, and later, many songs on Aaliyah’s second album One in A Million.

When Missy’s debut album Supa Dupa Fly dropped in 1997, it was groundbreaking. With Timbaland’s production and Missy’s flow, the two created a masterpiece.

The single “The Rain (Supa Dupa Fly)” and the video, produced by Hype Williams, was received well among listeners. She sampled “I Can’t Stand the Rain” by Ann Peebles, a song made in 1973, and wore her iconic blow-up suit that looked like a trash bag.

Her next few albums gave birth to the popular songs “Get Ur Freak On”, which won a Grammy for Best Rap Solo Performance, “Work It” and “Gossip Folks”. Missy Elliot’s sixth album “The Cookbook” received five Grammy nominations, where she won for Best Short Form Video for “Lose Control” ft. Ciara and Fatman Scoop.

Last year, Missy Elliot was the first female rapper to be inducted into the Songwriters Hall Fame, and she received the prestigious Michael Jackson Video Vanguard Award at the MTV Video Music Awards.

One female rapper some people deem as controversial is Kimberly Jones, known as Lil’ Kim. She changed what women in hip hop looked and sounded like. Her lyrics are indeed raunchy, but underneath that, she is telling women to love their bodies and never settle for less.

Lil’ Kim opened a door for rappers like Trina, Nicki Minaj, Rico Nasty and Megan Thee Stallion, and each one of these women uses their music to stand up for women’s rights, regardless of the song’s content.

Black women came and put their stamp on the music industry. Their messages are often bold and will make you look, and that’s not stopping anytime soon.

Previous articleHear it from them: Q&As with the SGA presidential candidates
Next articleA look into the Alumni Call Center