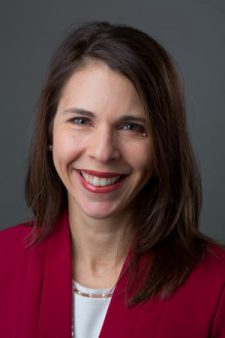 The College of Arts and Sciences is under new leadership this year, as UMKC welcomes Dr. Jenny Lundgren as the college’s interim dean.

Lundgren will lead the strategic aspects of CAS and provide oversight for the college’s programs and fiscal affairs.

U-News was able to sit down with Dean Lundgren for a short Q&A to help readers get to know her better.

Q: Where are you from?

A: I am originally from Oklahoma. I completed a bachelor’s degree in psychology at Oklahoma State University in 1999 and a Ph.D. in Psychology (Clinical) from the University at Albany State University of New York in 2004. I began my career at UMKC in 2006, where I was an assistant professor of psychology.  I received tenure in 2011 and achieved the rank of professor of psychology in 2016. I have previously served as director of the Ph.D. program in psychology and was the chair of psychology from 2011 to 2017. From 2017-2018 I was an associate dean of CAS, and in 2018 became the dean of the School of Graduate Studies. In addition to my administrative roles, I currently mentor three psychology doctoral students and serve as the treasurer of the Academy for Eating Disorders, an international eating disorder professional organization.

Q: What are some changes you want to make to the college of arts and sciences?

A: In the short-term, our primary goal is to focus on ways that CAS can support its students, help them thrive in college and ultimately achieve their career goals. Synergistic with that, we are also focused on supporting faculty so they can achieve their goals as teachers and scholars. Although we are in temporary positions, we are active in our interim roles, constantly working with the other associate deans, department chairs and faculty to reduce barriers to success and promote a positive culture at UMKC.

Q: What TV Show or book are you loving right now?

A: “Stranger Things” and Tara Westover’s “Educated, A Memoir.”

Q: One fun thing you did this summer?