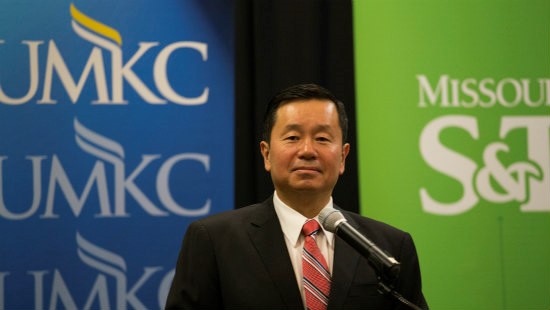 President Choi invites the UM community to share in the exchange of ideas with “First Five Fridays,” a series of vlog conversations held each Friday afternoon at 1p.m.

The episodes are two minutes long and can be leisurely watched while one pops popcorn, waits to be taken off hold, orders an Uber or whitens their teeth.

Choi said he was most impressed during his campus visits back in November by the “sense of commitment to the university and the value that we provide.”

“The excitement among the faculty, staff, and students was really, very exciting to see,” Choi said. “And they believe in the mission of the university to provide value through their education, to create the next generation of employees and staff members who are going to be making very important changes to the economy of this state, but at the same time, creating the breakthroughs in the research laboratories that’s going to make a difference in our economic development.”

“So,” Choi said, “it’s a very exciting time to be at the University of Missouri.”

This statement ended the first episode, but Choi and Fougere were back March 10 for the vlog conversation on Collaboration.

“I think it’s important that we all recognize that together, we can become a stronger university by collaborating,” Choi said. “So, the collaborating not only on the type of educational opportunities that are provided by online education, distance learning, collaborations in research but also collaborating when it comes to engaging our partners throughout the state. And that comes with leadership from the campuses, but that’s going to be a very important hallmark of this new approach in which we bring greater value to the university.”

With this new approach, Choi voiced that, as a flagship university, his vision is to pursue measurable success in a variety of ways. These include research, affordable, quality education, job placement and graduate studies.

community and maintain transparency from the start. In fact, students may have noticed they received an e-mail from him on March 10 in regards to terminating the university’s executive performance incentive program after it was heavily critiqued by Missouri State Auditor Nicole Galloway.

Choi’s video blogs offer an easy way for students and staff to put a face to the leader of the UM System and hear his personal opinions. Below each video there is an option to publicly comment on the content, providing students and staff a way to offer their thoughts in return.

Through meetings with the various stakeholders in the UM System, Choi emphasized that, as a leader, he will be working for them.

“I’m going to be working very closely, not only with the administrators, but also the key stakeholders to listen to their aspirations about their view…” Choi said, “and together, [we will] come up with a shared vision that’s going to create a university system that’s going to be stronger, more resilient for the future.”

In his own experience, Choi has learned his leadership style from the mentors in his life such as the former Dean of Engineering at Drexel University and the president of the University of Connecticut. Choi said he learned important lessons observing how they interacted, made difficult decisions and overcame mistakes.

All of president Choi’s vlogs are available at www.umsystem.edu/president.