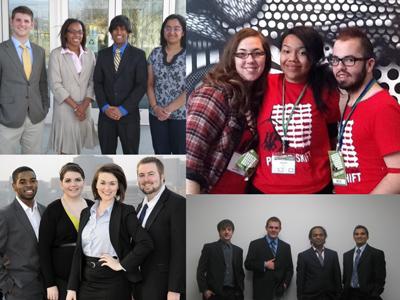 Four different parties are running for the four board positions: Student Voice, Gold, Kangaroo and Advocacy. One candidate, Joseph Salazar, is running independently for SGA president.

Students have the option of voting a one-party ticket or voting for candidates individually. However, the positions of president and executive vice president are voted on as one.

Here is a look at the platforms of the four parties running for the SGA Executive Board:

The Advocacy Party hopes to be an advocate for all UMKC students.

“We want to be a voice for all the students,” said Caleb-Michael Files, the Advocacy Party candidate for administrative vice president. “We all have commonalities, and there shouldn’t be labels that differentiate between us. We should work to get the to get stuff done on campus.”

To increase sustainability, the Advocacy Party wants to partner with Ripple Glass to further the recycling program and encourage alternative forms of transportation.

Most importantly, Files said, is increasing the use of renewable energy sources.

“We want the administration to see that it’s an issue,” Files said. “We want to get our campus off coal. It’s hurting the environment.”

To promote fiscal responsibility and transparency, the Advocacy Party wants to make the university’s budget accessible online, enabling students to see where allocations have been made.

Files said SGA votes should also be made available to students online.

“We wanted to know why College Republicans is getting so much money but an environmental student organization can’t even get $50,” Files said.

Other goals include more interaction between the Hospital Hill and Volker Campuses and a rollover print quota for students.

Teresa Sheffield, the Gold Party candidate for president, said one of her main goals is to increase the efficiency of SGA and other umbrella organizations that affect the operations of student groups.

“The more I got involved in clubs and organizations, the more I realized there needs to be some change in interaction between student organizations and SGA,” Sheffield said. “One of the main issues on our platform is that we want to run the red tape for organizations.”

To achieve this, Sheffield wants to see the successful implementation of Collegiate Link, an online resource approved by SGA last legislative session. Collegiate Link will allow organizations to fill out their paperwork online, streamlining the process.

Sheffield also mentioned an electronic stamp that she would like to see implemented by the Office of Student Involvement (OSI). This will allow organizations to attach a flyer to an email and send it to OSI, and receive an attachment that has been stamped electronically, as opposed to physically stamping each copy.

The Gold Party would also like to expedite event requests, which currently must be submitted to OSI two weeks in advance of the event. The reason for this, Sheffield said, is because OSI meets biweekly with the Campus Police and maintenance departments to review requests.

To increase transparency among campus organizations, Sheffield would like to see the creation of an open source document that will allow students to view allocations made by Student Activity Fee Committee (SAFC) and other funding bodies on campus.

Sheffield would like to facilitate this process by allowing each department to review event requests individually, allowing organizations to receive responses the same day, as opposed to after the meeting.

The Gold Party also wants to cut the salary for SGA Executive Board members in half, and give the savings of $8,500 back to students., which Sheffield said could be through a special event or scholarship.

Sheffield wants to partner with UMKC Athletics to increase school spirit. Goals include the creation of a pep band, student organization competitions at athletic events and events geared specifically toward commuter students.

Other goals include increasing SGA’s involvement in the Hospital Hill campus and improving the quality of Sodexo catering at the Student Union and University Center.

Animikh Ray, the Kangaroo Party candidate for president, would like to be a needed voice for the Hospital Hill campus on the SGA Executive Board.

To do this, Ray wants to open up channels of communication between the two campuses.

Ray, a pharmacy student, has served on several campus organizations, including SAFC.

The process of allocating funds to student organizations, he said, needs to be revised.

“We had some problems allocating funds to student organizations,” Ray said. “We want to improve the allocations process.”

“We are a diverse team,” Ray said. “I hope we can make it this time so the diversity of UMKC’s community can be represented by Student government.”

The Kangaroo Party also wants to make finding a parking spot on campus easier by opening up more options to students.

“We have a few things we really want to focus on,” Devineni said. “We want to continue some things the current SGA exec board has decided on that we want to follow through with.”

Devineni stressed the need for a rollover print quota, which was recommended in a resolution passed by the SGA Senate.

This would allow the unused portion of a student’s weekly $2.50 balance at Information Services-managed labs on campus to be used at a later time. Another option involves setting a number of pages for students each semester.

“We want to create more overlap between the general education requirements of different majors,” Devineni said. “By creating more overlap, you can really save students time and money.”

Other goals of the Student Voice Party include better integrating the Hospital Hill and Volker campuses and increasing school spirit.

“We want to make UMKC a more fun and exciting place,” Devineni said. “I think it’s gotten a lot better, but I want us to feel like a more centralized campus.”

Devineni said he would like to expand the Homecoming Week celebration by placing it on the SGA event calendar and focusing the celebration on current UMKC students, as opposed to focusing primarily on alumni.

IFC is currently planning a homecoming dance marathon, which Devineni said will be used to raise money for charity.

“We really want to promote [Homecoming] and get all different kinds of students to support it,” Devineni said.

“We want to be the voice for the students and address the concerns that are important to them,” Devineni said.

Joseph Salazar, an independent candidate for president, could not be reached for comment.