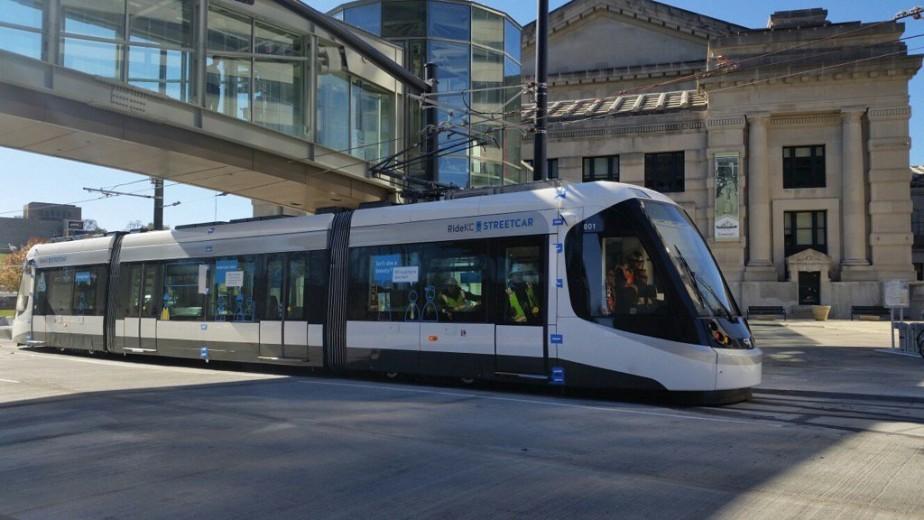 A faint electrical hum is the only sound made as it glides to a stop and the emphatic “ding-ding” makes passers-by notice.

It’s time to board the Kansas City Streetcar.

Gallup Map Company is located a short walk North of the Crossroads stop on the East side of Main. The store is a necessary streetcar history stop. It features 1900s Kansas City maps. Proprietor Pat Carroll artistically displays the 315 miles of rail the city once had. These routes connected over 130 million riders in 1922, 1923 and again in 1948, before steadily declining.

Some who work and live downtown have pointed out annoyances brought on by the streetcar route and design.

Driving behind the streetcar is a place few desire to be. Cars cannot pass on Main Street. Some streetcar stops have the end of the streetcar going through the intersection. Drivers who thought they could make the green light may inadvertently block traffic while they wait for the streetcar to pick up and drop off passengers.

Others have made complaints about the “futuristic design.” They would rather see an homage to the old PCC streetcars.

Carroll, owner of Gallup Map Company, gave an interesting point of view on possible streetcar expansion. With his expertise on aerial Kansas City, it’d be hard not to value his opinion. Carroll suggested expansion South to consider turning East on Armour Boulevard and then continuing South on Brookside Boulevard. This would connect Downtown, Westport and the Plaza.

Carroll also argued that this could responsibly transport individuals through Kansas City’s nightlife and may eliminate some drivers under the influence.

Mayor Sly James has publicly announced that there is room for development between Union Station and the Plaza.

Since 2012, downtown has seen $1.6 billion in development with some businesses specifically buying property along Main Street because of the presence of the streetcar.

If the streetcar is good for business, why did it go away in the first place?

In the 1970s an anti-trust lawyer accused General Motors, tire manufactures and oil companies for conspiring to end streetcars. General Motors was convicted of conspiracy in 1950. However, the charges were on trying to monopolize city buses. No connection has ever been made, but automobile popularity played an undeniable role in the fall of ridership.

When the “Greatest Generation” returned home from World War II and began buying automobiles produced in Detroit, public transportation ridership decreased every subsequent year while car registrations in Kansas City, and across the country increased.

KC Streetcar is made up of 30 employees. They manage the streetcar relationship between the city, Kansas City Area Transportation Authority (KCATA) and Herzog. Herzog provides all maintenance. The members of the streetcar 30 are governed by an appointed board, made up of those that live within the tax transportation district. Donna Mandelbaum, marketing and communications coordinator, described the pieces that connect the streetcar.

“[Herzog] are worldwide transportation experts, so they have a contract with us,” Mandelbaum said. “It was competitively bid. They won and I think it took a year to negotiate with them on that. They’re in charge of hiring the operators, training them, getting them on board.”

Mandelbaum, a former New York resident, warned there may be a learning curve for ridership.

“It will take riders who are not used to trains or subways time to get used to how it feels, and where to stand,” Mandelbaum said.

The wheels are easily overlooked, and if it weren’t for two rails that led it down the way and that faint hum, people could believe it hovered between Union Station and the River Market.

The streetcars are modern in appearance with little comparison to the 1889-1957 era. Each car is made up of three connected cabs in an elongated oval shape. A “bent-rake” device is attached to the roof of the car.

The “bent-rake” has a proper name – pantograph. Its job is to receive 750 watts of direct current electricity from four sub-power stations located around the route. A non-insulated copper wire delivers power to the streetcar’s pantograph and the electricity is grounded through the wheels.

Passengers at 16 plateau-like platforms can expect to wait between 10 to 15 minutes for the next pickup along the 2.2-mile route, which begins May 6.

When the streetcar arrives at a stop, passengers can press a button for entry or exit at three doors. The doors on each end have around a six-inch step up. The middle cab is at level-ground, a design which allows wheelchairs and bikes to simply roll on. No ramp necessary.

In the center cab there are seven seats on each side, three of which collapse for passengers with wheels. Two bars stretch down the roof of the entire car making room for 150 riders, at max capacity. The front and back cab hold 12 sitting passengers. These fixed seats face backwards or forwards, depending on the direction you are traveling in. The seats are smooth, curved and blue, which matches the RideKC color scheme.