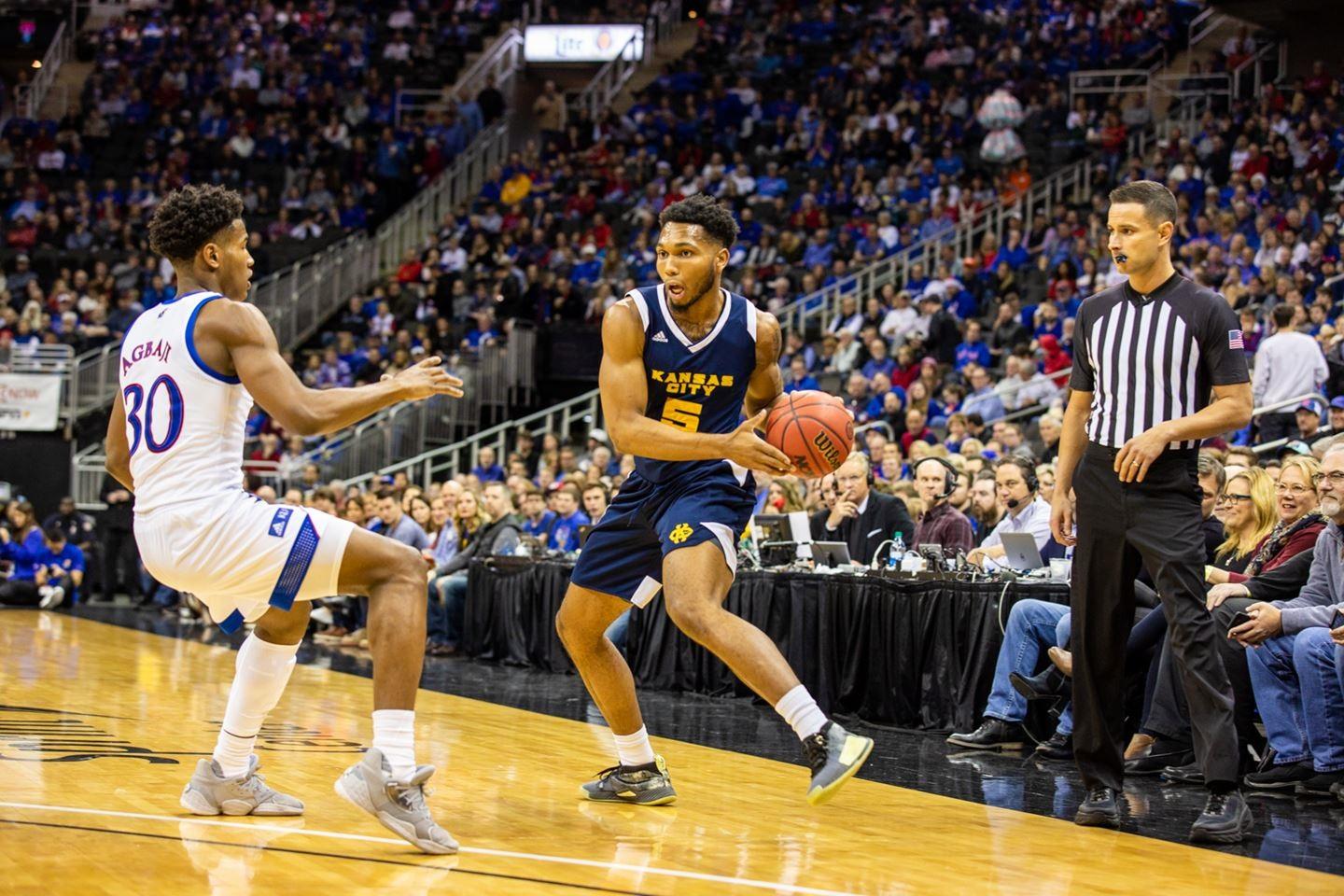 Nursing a 13-point lead with five minutes remaining in Kansas City’s game against Toledo, injured Roo Jahshire Hardnett shouted from the bench after teammate Javan White drew a foul in the lane.

“Look at my team out here working,” he exlaimed.

This positive energy propelled Kansas City to a statement 72-57 victory over the Rockets (8-3) inside the Swinney Center on Dec. 17th. The win snapped a three-game skid for Kansas City while also extending the team’s home record to 4-0 and overall record to 6-7.

“This was a remarkable win; Toledo is a great team that plays in the MAC Conference which is one of the 10 best conferences in the country,” Head Coach Donlon said after the game. “To get a quality home win over a team like that is impressive.”

From the jump, Kansas City asserted itself defensively, forcing 11 turnovers while yielding only 20 points in the first half. A bulk of the Roos’ success stemmed from wings Jordan Giles and Brandon McKissic and forward Javan White. Their long, active hands flustered Toledo’s offensive execution on the perimeter.

The strong play carried into the second half, helping the Roos increase a 12-point halftime lead to as large as 21 midway through the half. Kansas City suffocated Toledo to a season-low in points (57), three-pointers (three), and field-goal percentage (33.3%).

Such a defensive showing is impressive against any team, but especially against a Toledo team which entered the game 14th and 18th, respectively, in the nation in three-pointers (10.3 per game) and scoring (82.4 points per game).

“This was our first game against a high-level offensive team where we played defense for 40 minutes,” Donlon said. “There weren’t any letdowns, any luls. We needed a game where our guys could see what 40 minutes of relentless defense can do.”

McKissic, who tallied a game-high 18 points and six assists in the win, was tasked in shadowing Toledo’s leading-scorer Marreon Jackson (17.8 points per game) most of the contest. In 34 minutes, Jackson was stymied to a paltry eight points on 1-of-9 shooting.

Following the game, McKissic spoke on his strong two-way performance, reiterating Donlon’s defensive blueprint as well as providing insight on what the team wishes to accomplish in the future.

“My coaches told me [Jackson] likes to go left, so I went out and followed through,” McKissic said. “I take pride in our defense. I wasn’t going to let him get 18 at our place. It’s going to be a hard, gritty fight every game. We are going to bring our hard hats and be physical on defense each night.”

Senior Rob Whitfield contributed to McKissic’s excellent outing with 16 points, three assists and four three-pointers. After a five-game stretch of shooting under 30% from the field and from deep, Whitfield felt relieved once he knocked down a couple shots early.

“I feel like I needed a game like this,” Whitfield said. “I’ve been practicing better lately; coaches are getting on me to play harder and I went out there and did it on both-ends. Offensively, [coaches] told me to keep shooting the ball and defensively make sure I guard my man.”

Kansas City competed in its last non-conference match of the year against South Dakota on Dec. 22, winning 78-75. This was a big win for the Roos, as South Dakota will be a conference opponent next season when Kansas City moves to the Summit League.

The Roos were led by senior forward Jordan Giles’ career-high 25 points (shooting 10 of 11), 19 points from McKissic and 15 from Whitfield. Hardnett sank a three-pointer with two seconds left to seal the dramatic victory.