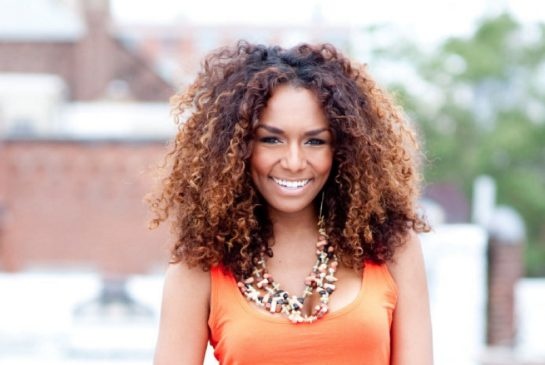 UMKC students were part of a “conversation” with transgender activist and author Janet Mock at Pierson auditorium Monday. The event was a part of both LGBTQIA Programs and Services’ Pride Month and the SGA Black Lives Matter series.

“As this is an event for students and by students, it’s only fitting that one of our campus leaders hosts tonight’s conversation,” said LGBTQIA Coordinator Jonathan Pryor as he introduced Burt.

After a few minutes of light-hearted banter, Mock got very serious. She talked about grappling with survivor’s guilt: as an upper-class, passable, and visible trans woman, Mock lives a reality not attainable by many of her transgender sisters.

“It’s difficult when you have such bizarre holes in representation of trans lives,” Mock said. “You either see someone who is completely in a space of triumph or success. . .and on the opposite end of that we have tragedy and trauma. You see someone in a casket, or you hear about somebody’s death. It’s difficult to be a trans woman of color and to see both and to see your sisters and siblings struggling and not having the same kind of freedom and access and resources that you have. . .It’s something that I grapple with daily.”

Mock doesn’t really believe that this guilt can be alleviated. Instead, she sees her activism as the “debt” she pays in exchange for being luckier than her peers.

Much of the conversation centered around Mock’s memoir, Redefining Realness: My Path to Womanhood, Identity, Love and So Much More, which chronicles her childhood and teenage years. Mock discussed making sense of her childhood memories as an adult. She not only had to distance herself form her childhood trauma, but also had to convey to family members how their rigid enforcement of gender roles affected her.

“Six-year-old me wasn’t able to have those conversations with them,” Mock said.
Mock described her approach to writing her memoir as “part journalist, part diary.” She used family members as sources to contextualize her childhood experiences. This process allowed her to connect with her relatives in a way she didn’t expect.

“Interviewing my family allowed me to be incredibly transparent with them about the points I was going to explore and write about,” Mock said. “I think, for my family, what was difficult and hard for them was hearing about the things that didn’t involve them.”

In her book, Mock describes funding her transition through sex work as a teenager. Her family did not know about this aspect of her life.

“Them not really knowing that that was something I had gone through, I think, was a really difficult time for my family to grapple with,” Mock said. “They loved me. And they weren’t able to assist me through that time.”

Overall Mock sees the five years she spent researching her memoir as a “learning process” for everyone involved.

“I was never embraced as Native Hawaiian,” Mock said.

She discussed how her identities intersect, and how they shaped her into the person that she is today.

“A lot the work I’ve been able to do as an adult is to be able to say that ‘I don’t believe there are any parts of my life that I can separate into certain parts,’” Mock said. “The point of intersectionality is that I can’t just separate being trans from being black from being a woman. All of that, like my trans-ness, is seen through the prism of being a black person, and a Native person, and as someone who grew up poor with parents that struggled with addiction . . . all of that is part of my experiences.”

Mock, who first visited Kansas City in 2014 for the Midwest Bisexual, Lesbian, Gay, Transgender, and Ally College Conference, could not recall her last visit.

“I forgot that I even came here,” Mock said. “It was just so quick!”

Students were able buy Mock’s memoir, get it signed and take a picture with her.