While many students will spend this Halloween partying or trick-or-treating, (you are never too old, right?) there is an alternative way to get some kicks on Halloween, visiting haunted places in Kansas City and the surrounding areas.

Many students are open to the idea of hauntings. Student Chase Stewart said, “My uncle and I went ghost hunting once to see if we could find anything out in a cemetery on 135th and Blackbob. We went out with a camera and a voice recorder but did not find any evidence.

“Later he bought an EMF detector online and passed it on to me because I want to keep trying to find the unknown. I never had any experience with hauntings but I keep myself educated on the matter.” Whether or not you believe in paranormal activity and ghosts, there are some very intriguing stories behind the haunting and old folklore.

Stull Cemetery is located about 10 miles west of Lawrence, Kan. One of the more famous (or infamous) haunted locations, it is said to be much more than just a cemetery possessed by ghosts or demons. It is said that the church in the graveyard is one of the seven entrances to hell.

According to urban legend, Stull is the reason why UK band, The Cure, refused to play in Kansas. In season five of the TV series “Supernatural,” an epic battle is waged between the devil and the lead characters, set in Stull Cemetery.

An article that was printed in the University of Kansas student publication about Stull Cemetery in 1974 reported several student encounters with mysterious forces in the graveyard. This fed the legend that the devil shows up at Stull twice a year at midnight, on Halloween and spring equinox.

“Anyone reading the original article can infer that it was probably meant as a bit of fun and might even have been intended for the paper’s Halloween edition, but was held back,” said Mike Hendricks in an article in The Kansas City Star. “No evidence was given, other than some college students saying the cemetery was creepy and they had memory lapses after visiting it.”

However, the story had been put into motion.

In 1978, 150 people showed up on the spring equinox to wait for the devil, who unfortunately didn’t show up to his own party.

As the legend grew, so did the crowd, which did quite a lot of destruction to the graves and the already crumbling church. Eventually, a chain-link fence and patrols had to be installed around the cemetery due to vandalism and trespassing from people intent to see the legend for themselves.

“According to Scott McPherson, juvenile offender attorney for the Douglas County District Attorney’s office, trespassing on Stull cemetery could bring maximum fines of $1,000 and up to six months in jail,” said an article by Richard Gintowt on Lawrence.com.

“There is not a gate to hell in the cemetery in Stull Kansas,” said Blake Smith in his article in the Skeptical Inquirer. “And the people of Stull have suffered enough from drunken idiots who, disappointed at the lack of supernatural activity, have proceeded to sew a little evil of their own”.

On Halloween, in 1999, reporters and a camera crew finally showed up to prove once and for all whether or not the tales were factual. However, the owners had the deputies escort the crowd off the property at 11:30 p.m. The legend still lives on.

After the west wall of the church collapsed in 2002, the church was demolished by a friend of the owner. “The sense was that if kids showed up, there was a real likelihood that one of the walls might go,” the property owner John Haase said in a statement. “All he did was just give it a nudge and the whole thing came down.”

Author Lisa Hefner Heitz has compiled many of the Stull Legends into her book, “Haunted: Kansas.”

Some of these ghost stories are very compelling. Even if one thinks that ghouls and demons are rubbish, they are rather entertaining. There will always be tales of the supernatural, and many of these are yet to be disproven. “I do believe in hauntings,” said UMKC student Chase Stewart. “I believe that when we die our energy from the bodies live on in some way shape or form. Like Einstein’s theory energy can neither be created or destroyed. So where does that energy go? That question stays in my mind to when I think of the paranormal.”

For more information on the hauntings and haunted places near you, check out “Haunted Places: The National Directory” by Dennis William Hauck.

Alexander Major’s Home, at 8201 State Line Road, is a white washed two story farm house, which was turned into a museum. Alexander Major is famous for starting the Pony Express. The home was built in 1856. It is allegedly haunted by the ghost of Louisa Johnston. She lived and died in the caretaker’s cottage on the estate, after spending the majority of her life trying to restore the mansion to its former glory. Her spirit has been seen walking around the estate as well as looking out of the windows. Despite the reports of her spectre, the Historical Foundation refutes the claims of hauntings.

St. Mary’s Episcopalian Church, dating back to 1857, is one of the oldest churches in Kansas City. The Gothic-inspired architecture of the building, as well as the original gas lamps that still hang along its walls only add to its heavy atmosphere. Both clergy and parishioners throughout the years claimed to see the ghost of Father Henry David Jardine.

Jardine led the church to much prosperity and growth during his time at St. Mary’s from 1879 to 1886. His leadership ended with his life. His untimely death in 1886 was ruled a suicide, and ever since, it is said that he roams the aisles of the church.

The Donaldson House was built at the turn of the century for a physician’s family. The Donaldson family, however, didn’t move in until 1939.

It stayed in the Donaldson family until 1967, when the Kansas City Art Institute bought it. After construction started, ghosts began to be reported in the house.

According to the Greatest Unsolved Mysteries website, “Individuals that specialize in the paranormal have stated that when a structure undergoes physical changes such as renovations and remodeling, it is common for unexplained phenomenon to occur.”

These include various manifestations, including a floating orb, multiple spectre sightings and an incident where college students saw a toolbox thrown across the room by an invisible force. 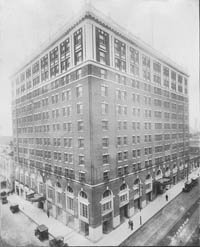 Muehlebach Hotel, at 12th and Baltimore streets, opened in 1816 and is one of the Kansas City traditions. It is an opulent and prestigious affair.

It has housed stars, celebrities and politicians such as Babe Ruth, Ronald Reagan, Harry Truman, Elvis Presley, Theodore Roosevelt and The Beatles. It was at its peak during the prohibition era in Kansas City, while it was evolving into a jazz metropolis.

A manifestation that has been dubbed “The Blue Lady” is said to wander throughout the halls of the hotel, desperately searching for something. The traditional lore behind the manifestation is that the ghost was of an actress who searches for her vanished lover.

The Hotel Savoy, constructed in 1898, is a brick example of the Italian Renaissance style. The hotel has been renovated in a historically accurate style. The interior of the building is very vintage. The lobby features beautiful stained glass windows. The Kansas City Library website says that it was built in 1888. According to popular claim, it is the oldest hotel west of the Mississipi that has been uninterruptedly open.

Many hotel visitors have reported hearing strange footsteps as well as strange noises. Room 505, has been the focus of spectral activity. The ghost of a resident named Betsy Ward who died in a bathtub in the 1800s turns the water on and off and closes the shower curtains in the room 505. In the ’90s, Larry Freedman, a guest in Room 505 reported that after he turned off the faucet in the bathtub and started brushing his teeth, the water kept running. He turned it off again and repeated this process three more times, after which he reported these strange occurrences to the manager, Sean Byrnes. Music was also heard by the manager coming out of his apartment while he was gone.

Strawberry Hill isn’t referring to the Coldplay song, but rather, a haunted estate-turned-museum.

The house was built in 1887. In 1919, it was bought by the Sisters of St. Francis Christ to serve as an orphanage, as an influenza epidemic left many children without parents. It was called the St. John the Baptist Children’s Home. It was turned into a museum in 1988, thanks to the hard work of the Strawberry Hill Ethnic Cultural Society. A young woman has been said to roam the corridors of the house. She appears as if she is alive, and questions, “Where’s the house of the priest?” before disappearing. She has brilliant red hair, and wears red 1940s-style garments that trail blood. They call her the “Lady in Red.” She is thought to be a woman who was taken in by the sisters, but died after a failed abortion.

Two nuns reported seeing her walking through the chapel toward the altar. Visitors to the house and museum and tour guides have reported seeing the woman as well. There is a male ghost that haunts the third floor and several playing child-like ghost figures, as well as paranormal activity, like phantom singing and chanting and lights flickering on and off.

Sauers Castle was built by the German immigrant Anton Sauer for him and his family. Sauer was a respected and successful businessman. This mansion was built with technology ahead of its time, including a lookout tower, as the mansion was along the Santa Fe Trail, which rather unsavory people could travel along. The family moved into the finished building in 1872. Only seven years later Sauer died in his own home, which had taken him years to build. The second husband of one of Sauer’s descendants who lived in the castle committed suicide in the house.

Lights are seen in the upper story building as well as levitating around the grounds.

While the house was abandoned, neighbors heard shrieking, laughter and voices coming from the building. Several different ghosts have been reported here, a couple dancing, a young boy, and a beautiful woman.

Kansas City psychic Maurice Schwalm claimed to have found spirits in the house. Multiple other ghost hunters/psychics have searched the house, including Becky Ray of Paranormal Activity Investigators. Results are inconclusive.