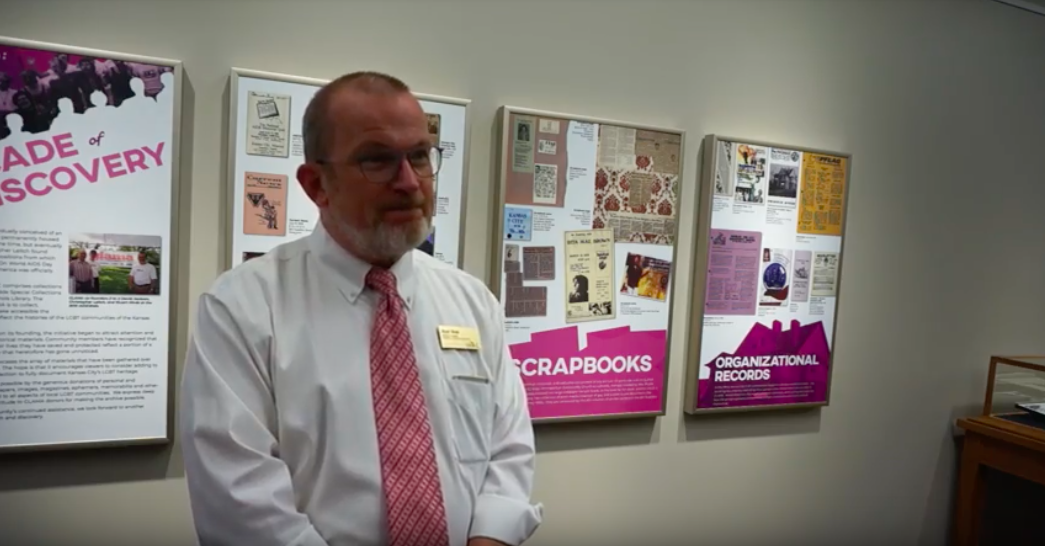 The histories of the LGBTQIA+ community are one of the most at risk of becoming lost to time, but thanks to the Gay and Lesbian Archive of Mid-America (GLAMA), the organization is collecting, maintaining, protecting and celebrating these histories.

GLAMA launched its latest exhibit Thursday night, “GLAMA at 10: A Decade of Discovery,” which commemorates the work done by the archive in the last decade.

“The exhibit actually features different types of content from the collection, as well as award-winning student work,” said LaBudde Special Collections Curator Stuart Hinds. “Projects that the archive has spearheaded that are really about community outreach and engagement, and then looking at the future of GLAMA.”

According to Anthony LaBat, operations assistant at the LaBudde Special Collections, the collection began with Hinds’ personal collection.

“Stuart started gathering GLAMA stuff back in the ‘80s when he was working with the Good Samaritan Project,” Blat said. “A lot of the initial drive to document the community came from his realization that an entire generation of people was being lost except for their documents. Things were getting just left behind. So he started collecting them in an effort to document the history of a demographic of people.”

Several donors and prominent Kansas City LGBTQIA+ community members attended the event. Much of the collection is made up of contributions from local donors.

A prominent donor Lea Hopkins, spoke at the event. She mentioned how happy she was to find GLAMA because she worried about the future of her personal collection, seeing as she is the last living member of her family.

Another major donor is Melinda Ryder, who also has her own collection at GLAMA.

Ryder, a fixture in the Kansas City LGBTQIA+ community for decades who’s been a drag performer for 44 years, has been involved with GLAMA for the better part of the last decade.

According to Hinds, students play a special role within GLAMA, writing papers, recording oral histories and even producing films because of the collections.

“It’s a wide variety of projects that have come out of the archive,” said Hinds. “So to me, that’s one of the most exciting things: collecting this stuff, getting it in front of students, and then seeing the amazing things that they will do with it.”

GLAMA has prospered in the decade it has operated, which, in the lifetime of an archive, is not long.

“GLAMA when it first started—we had no idea what was going to happen,” said Hinds. “And what’s happened is the response has far exceeded our wildest expectations, both in terms of response from the community, stuff coming in, and response from researchers—students, faculty, community researchers actually using the material.”

GLAMA remains a place with valuable information about an entire demographic of Kansas City that is at risk of being lost to time. Hinds expressed his satisfaction that long after he is gone, the collection will still be there, and students and researchers will still be able to interact with it.

“GLAMA at 10: A Decade of Discovery” will be available for viewing at the LaBudde Special Collections in the Miller Nichols Library until the end of March 2020.