Getting ‘Eclipsed’ at Playwright Slam 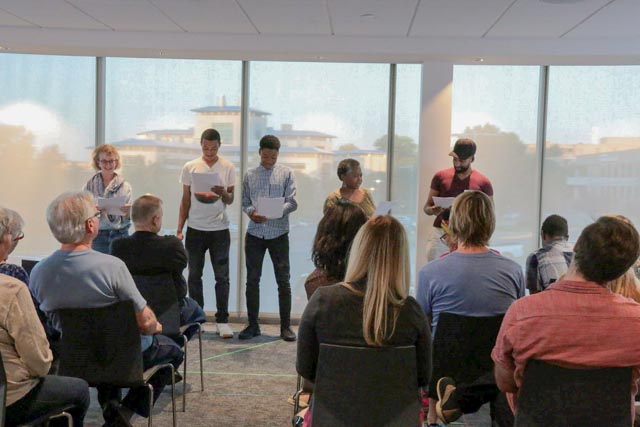 It’s not a typical night at the theatre when an audience member asks if it’s “kosher to bring a drink on stage.” This week, the Kansas City Repertory hosted one of their OriginKC: Monday Night Playwright Series, “Playwright Slam”, along with cold beverages and an enthusiastic audience.

What is a “Playwright Slam?” Slams give up-and-coming playwrights and creatives the chance to anonymously submit and test the waters on new plays as they are being built. Playwright Slams give life to 1-3 page scripts, with script-in-hand readings acted out by volunteers from the audience.

This week’s theme was “The Solar Eclipse.” Thirteen original scripts, all pertaining to the recent total eclipse, were acted out by eager volunteers from the audience. Burgeoning playwrights encapsulated all of the humor and jokes made at the expense of the eclipse.

As anticipated, animals were out of character, temperatures were dropping, clouds were obstructing prime eclipse views and corneas were burning from staring at the sun sans eclipse glasses. In the more imaginative scripts, dead people were rising, moon goddesses were appearing, the sun, moon and earth united to sing Bonnie Tyler’s “Total Eclipse of the Heart” and Donald Trump was the brunt of almost every joke. Well, that last one wasn’t so visionary.

This performance was fun. Whether it was the clever prose, the spontaneity of the performance, or the relaxed vibe, it was obvious that the attendees enjoyed themselves. The program also contained three interludes where students from the KCRep Summer Youth Ensemble, a free, young artist program, recited original poetry aligning with the theme of the Eclipse.

“My favorite part of these events is that they serve the Kansas City Community at large,” said Lydia Fuqua, the Assistant Education Director at KCRep. “We flip the traditional structure of patrons attending to hear the plays we curate, and instead everyone is a participant. It creates a buoyant, powerful space for collective engagement.”

The idea was brought to KC Repertory by Nathan Louis Jackson, who helped host the event.

“He had a blast supporting writer slams at KU as an undergrad, and I’m thrilled that he brought the concept to KCRep,” reports Fuqua.

KCRep has been hosting Playwright Slams biannually since their 2015-2016 season, and they’ve been a hit. According to Fuqua, anyone is welcome to bring a script.

“You can be an established playwright, or a person who has never put pen to paper before. Everyone has a voice at the Playwright Slam. Part of the fun is that submissions are anonymous, and we just grab scripts from the pile, invite folks from the audience to come act, and launch into wonderful and often hilarious cold reads,” said Fuqua.

For those looking to get involved in Playwright Slam, all you need to do is RSVP on their website before the event, or just show up with a script in hand on the chosen topic. Fuqua reports that topics are typically released 3-4 weeks in advance.

Whether you come with a script or solely a desire to watch, prepare to enjoy some good theatre at the next Playwright Slam.