From KC to LA: filmmaker Morgan Cooper makes a name for himself 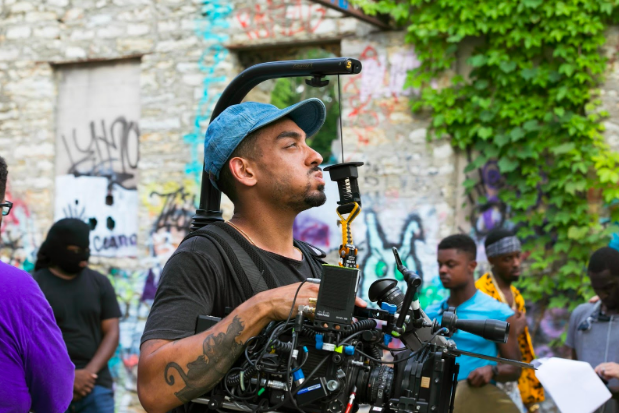 From having conversations with celebrities like filmmaker Ava DuVernay to actor Will Smith, you could say Kansas City filmmaker Morgan Cooper has made it in life.

Cooper was only 18 when his love for filmmaking started after buying his first camera.

Before working on his craft, Cooper spent most of his high school career teaching himself music production, and he took the same approach for filmmaking, spending many hours in his basement learning how to work the camera and improve his skills.

“That’s what it takes to become great at anything,” Cooper said. “You have to immerse yourself in it. It has to really become a lifestyle.”

Just like other filmmakers in Kansas City, Cooper had to take small steps and film whatever he could, such as events and even music videos.

As Cooper got more practice with the camera, he was able to develop his own style, which led to his work gaining more attention from the filmmaking community.

His filmmaking career skyrocketed during the release of his fanmade trailer, “BEL-AIR,” which parodies Will Smith’s sitcom, “The Fresh Prince of Bel-Air” and twists it into a dark drama.

The trailer also gained the attention of the fresh prince himself, which led the two to meet each other in Miami, Florida.

“He was just so warm—everything you can think about Will is true and more,” Cooper said. “He’s a brilliant storyteller and is extremely passionate about it. We hit it off right away, and I can’t say enough about him.”

Cooper also got the chance to speak to Ava DuVernay, director of the 2019 Netflix film “When They See Us.”

“BEL-AIR” gained her attention, and just like Smith, DuVernay also gave Cooper some helpful advice he still takes to heart to this day.

“The fact that she took the time to talk to me just really said a lot about who she is, and it really meant a lot to me,” Cooper said.

Although it’s been almost a year since Cooper made the big move to Los Angeles to help grow his career, he still has a lot of love for his hometown. Scenes from “BEL-AIR” and his film “U SHOOT VIDEOS?” feature locations from Kansas City. Some of Cooper’s favorite spots to film at are the West Bottoms and The Scout statue located in Penn Valley Park. Cooper is also fond of the filmmaking community here, saying everyone is willing to help each other out.

“The greatest thing about the Kansas City filmmaking community is that there’s always something going on,” Cooper said. “There are a lot of nice people who are willing to help you and be supportive of the fact that you’re reaching out and trying to learn.”

While Cooper has a lot of love for the community and slow-paced lifestyle Kansas City offers, he also enjoys working and honing his craft in fast-paced Los Angeles.

“You’ve got to bloom where you’re planted right now,” Cooper said. “This is where the next phase of my career is blooming.”

For the rest of 2020, Cooper plans on working on his first major TV production, “Black Coffee,” with actress Gabrielle Union and Sony Pictures TV. He is also writing two features and is working on producing a show with Universal Studios.