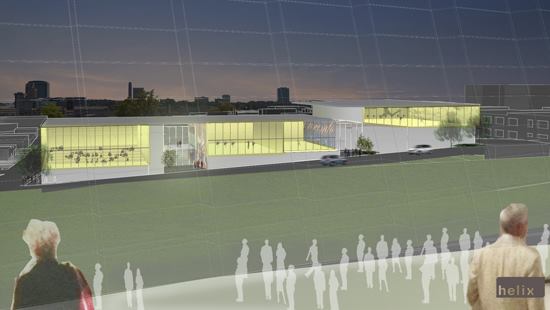 UMKC’s Downtown Campus for the Arts took a critical step toward becoming a tangible reality on Sept. 18 when the University officially announced its contract with Helix Architecture + Design of Kansas City and HGA of Minneapolis. When contracts between both parties are finalized, the design team will proceed with planning and concept design for the new Conservatory of Music and Dance, which is the first phase of the Downtown Campus for the Arts project.
Concept design for the new Conservatory – which will be located south of the Kauffman Center – is estimated for completion in early 2015, and building the first phase of the campus is estimated to cost $96 million.
An additional $19 million is needed to complete private fundraising for the project. When that is accomplished, UMKC will be eligible to apply for a $48 million matching grant from the state of Missouri’s Higher Education Capital Fund.
White Recital Hall and Spencer Theatre, located on the Volker campus inside the James C. Olson Performing Arts Center at 4949 Cherry St., will remain the venue for Conservatory performances, and updates to the building have already been discussed between Helix and UMKC.