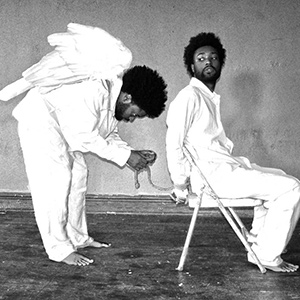 The inherent power of the Arts to affect the soul has been the topic of many films. From the impersonal nature of Julian Schnabel’s 1996 biographical film “Basquiat” and Fellini’s 1954 “La Strada,” neither affect the audience compared to filmmaker Damon Lee Patterson’s documentary “Art Saved My Life,” which premiered at the Kansas City Fringe Festival on Friday,  July 19.

A creation made over the course of two years, the concept for “Art Saved My Life” came to Patterson after teaching art to children. The dramatic change he saw, many coming out of their shells and developing their own voices inspired him to create the film as a direct presentation of the power art holds to help and heal.

The structure of the film is a very interesting and extremely personal style in which artists, both local and otherwise, speak directly to the camera on the subject of their own ideas about art as well as how it has shaped and helped their lives. Through the stories, an amazing collection of testimonies is formed that broadens both the very definition of art as well as how it fulfills people.

Many notable artists grace the documentary, from rapper Tech N9ne discussing his loves and inspirations to local muralist Alexander Austin commenting on his rise from homelessness to decorating Kansas City with his enormous murals depicting noted figures like Buck O’Neil and Martin Luther King Jr. There is also an appearance by UMKC Conservatory’s jazz instructor and musician Bobby Watson talking about the worth of the arts in education.

A diverse collection of individuals were interviewed, including Theresa Goodman, a yoga therapist who spoke of the effect yoga therapy as an art form has had on her life and the lives of others and Lovely Jane van Benthusen, a health activist who after overcoming cancer with what is known as the “healing diet” offers encouragement and instruction as a “health muse” to others.

“Art Saved My Life” is a documentary unlike many others. It demonstrates poignant closeness of the remarkable healing qualities of the arts while simultaneously offering a look at the various philosophies on its ability to captivate and empower.