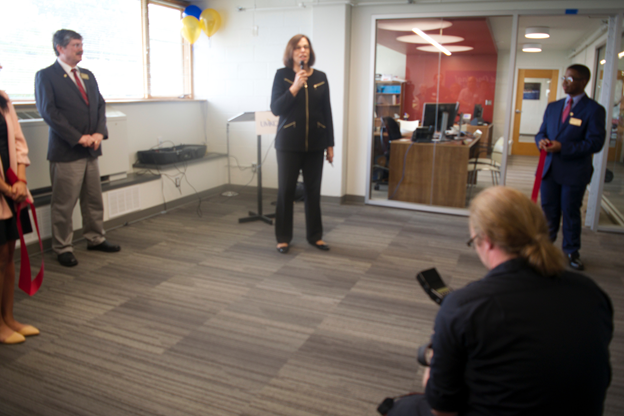 Wednesday, Nov. 2 marked the grand opening of Cherry Hall’s fourth floor. The million-dollar project is the new and improved home of the Honors College as well as the departments of philosophy, criminal justice, and criminology.

James McKusick, Dean of the UMKC Honors College, led the opening by recalling the amount of time and energy put into the building of the project.

“It wasn’t just an accident we happened to stumble upon,i said McKusick.  “This is something we have been planning for a very long time. We are committed to the success of our students.”

McKusick was not the only faculty member to stop by the opening to say a few words.

Wayne Vaught, Dean of Arts and Sciences and Kristi Holsinger, Chair of the Criminology Department, were also in attendance. The two spoke of how excited they were about the project and of the effort that was put into its creation.

“On behalf of our department, I would just like to say how excited we are to have moved here,” Holsinger said. “We love this space.”

Cherry Hall was a dormitory from 1955 until itst closing in 2009. The hall remained vacant until becoming home to the departments of social work and psychology in 2011.

Dirk Henke was the head architect brought on by the school to begin working on the hall in 2012. There was a brief halt in planning and production until 2013. March of 2015 initiated the renovation of the Hall.  inis spac, which was successfully completed in July of this year.

Bruce Bubacz, Professor and Chair of the Department of Philosophy spoke of this process while remembering what once was of the Cherry Hall building. “I’m not sure students know how much this building has gone through,” he said. “This floor is where I’ve been trying to get them to come and study. It all just makes me so happy.”

Cherry Hall to get them to come and study, not only to floor department students but to all students as well.