Chancellor Leo. E. Morton is Kansas Citian of the Year 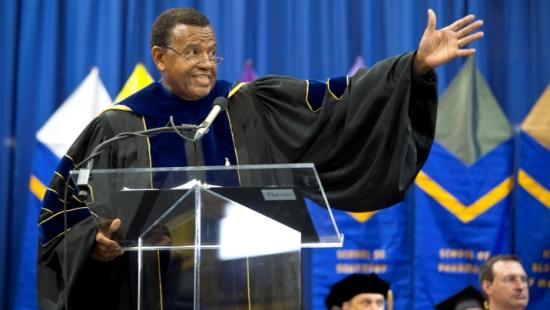 UMKC Chancellor Leo E. Morton was recognized as Kansas Citian of the Year by the Greater Kansas City Chamber of Commerce on Tuesday, Nov. 25 at its annual dinner gala in the Kansas City Convention Center.

Morton has been a prominent figure in the Kansas City community for many years. The chancellor has a bachelor’s degree in mechanical engineering from Tuskegee University, a master’s of science degree from Massachusetts Institute of Technology and nearly 15 years of experience in the corporate world. He has been UMKC’s chancellor since Dec. 15, 2008. Prior to his appointment, Morton worked for Aquila, Inc., first as vice president of performance management and later as senior vice president and chief administrative officer of the company.

The chancellor has been a UMKC Trustee since 2000, and served as chairman of the Trustees Board for three years before he was appointed interim chancellor of the University.

Morton is chairman of the advisory board of major regional youth development organization Prep-KC, co-chair of the Kansas City Area Development Council and serves as a board member for MRIGlobal, Union Station, Civic Council of Greater Kansas City, Truman Medical Center and Kansas City Business Leaders for Education. He is also on the Advisory Committee for the National Association of Corporate Directors, Heartland Chapter.

The Chamber has been presenting the honor to influential Kansas Citians since 1960.

The award is considered the Chamber’s highest honor, and is designed to recognize “those persons whose civic contributions and achievements have reflected this insight, creativity and consciousness necessary to build and maintain a quality urban community,” according to its website.

The Kansas Citian of the Year award is always announced at the gala as a surprise, which, according to the Chamber, “each year presents a different challenge in making sure the unsuspecting award winner is, in fact, in the audience to receive it.” Morton appeared shocked to be the award’s recipient.

“You folks can’t know how much I love this city,” Morton said. “Every day I ask God to bless me so that I can help others.”

“’Dance Moderne VI’ epitomizes the cultural renaissance that continues in Kansas City, from the building of the Kauffman Center for the Performing Arts, to the grass roots genesis of the Crossroads Arts District,” Corbin said. “The entrepreneurial spirit knows no boundaries, as it thrives both in the Kansas City arts and business communities.”

President and chief executive officer of the Chamber of Commerce Jim Heeter praised Morton for his work and efforts to improve the Kansas City community.

“Leo is the epitome of civic and community leadership, and everything he does is done with grace and style,” Heeter said. “He has been personally involved in each of our Big 5 initiatives and we owe him a debt of gratitude for his leadership in what I know will be a successful effort to create a new downtown arts campus next to our fabulous Kauffman Center for the Performing Arts. Leo is a perfect choice to join the prestigious ranks of Kansas Citians of the Year.”

The Chamber’s “Big 5” initiative “elevates the Kansas City region onto the world stage and makes the area one of America’s best places to work, live, start a business and grow a business,” and also “promises to bring better health, improved education, more jobs, increased investment and a better quality of life to everyone in the region,” according to its website.

The Big 5 initiatives were established over seven months of meetings and deliberations amongst people from all over the Kansas City region. The initiatives are: “Building Kansas City’s Workforce of Tomorrow through Kindergarten-Readiness, Revitalizing our Urban Neighborhoods through the Urban Neighborhood Initiative (UNI), Making Kansas City America’s Most Entrepreneurial City, Growing Kansas City’s Medical Research from Discovery to Cure and Moving UMKC’s World-Class Arts Programs to a new Downtown Location,” according to the Chamber of Commerce.

The focus of the gala was entrepreneurship and ways in which the Chamber and its supporters can influence the city’s entrepreneurial efforts.

“In 2015 and beyond we will witness the collaboration of education, elected officials, foundations, businesses and others to develop a common entrepreneurial vision and a greater understanding, to act with clarity and focus, to continue the journey for Kansas City to achieve the Big 5 goal of becoming the most entrepreneurial city in the United States,” said incoming Chamber chair Terry Dunn. “This is our journey and we will travel this road together.”

Founder and CEO of the well-known clothing company FUBU (For Us By Us), Daymond John, provided the keynote address for the dinner, and Morton posed for photos with several previous winners of the award including Bloch, U.S. Rep. Emanuel Cleaver II, Robert D. Regnier and Shirley and Barnett C. Helzberg Jr.

Previous articleEvents unfold in Ferguson
Next articleMy email should be private