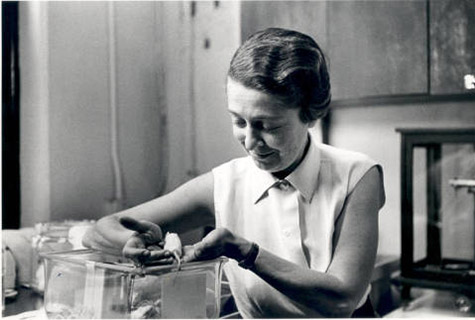 What do you do when things get tough? How do you find a way to pursue your dream in the face of adversity? One women in STEM takes the cake on resourcefulness: neurophysiologist and Nobel Laureate Dr. Rita Levi-Montalcini.

A Jewish woman living in Italy during World War II, she said, “Above all, don’t fear difficult moments. The best comes from them.”

Levi-Montalcini and her twin sister, Paola, were born on April 22, 1909, in Turin, Italy. Though her parents were both loving and supportive, her father did not believe that a woman should have a career, but rather focus on her family. He wouldn’t let his daughters enroll in university. By age 20, however, Levi-Montalcini had decided she didn’t want to be a wife and mother. She asked her father’s permission to pursue her education and enrolled in medical school in Turin, under the tutelage of Dr. Giuseppe Levi.

In 1939, Levi-Montalcini moved to Brussels as a guest researcher at the Institute of Neurological Research. Fearing an invasion in Belgium, she returned to Italy in 1940.

Levi-Montalcini’s family chose to remain in Italy and abide by the racist laws of Mussolini. Unable to utilize the research facilities of the “Aryan” population, she built her own laboratory in her bedroom. She was joined by Giuseppe Levi, who served as her only assistant. Together, they studied the nervous system of chicken embryos. By 1941, the bombings in Turin forced Levi-Montalcini to abandon her lab and retreat to the country, where she built a new lab to continue her work. But it wouldn’t last long. In 1943, German forces invaded Italy, forcing Levi-Montalcini and her family into hiding in Florence.

In August 1944, the Germans were driven out of Italy and Levi-Montalcini was able to come out of hiding. She worked as a doctor in an Allied camp until the end of the war. Then she returned to Turin to work at the university. In 1947, she received an invitation to continue her work with chicken embryos at Washington University in St. Louis, Missouri. While there, Levi-Montalcini discovered the Nerve Growth Factor, which plays a critical role in the development of the nervous system.

She became an Associate Professor in 1956, and a full Professor in 1958. During the 1960’s and 1970’s, she split her time between St. Louis and Rome, establishing and leading the Institute of Cell Biology under the Italian National Council of Research. She retired from Washington University in 1977, and became a Guest Professor in Rome.

Levi-Montalcini was awarded the Nobel Prize in Physiology or Medicine in 1986, along with her collaborator Stanley Cohen, “for their discoveries of growth factors.”

She also won the American National Medal of Science in 1987, and became an Italian Senator for Life in 2001. In the 1990’s, she was the first woman to serve on the board of the Enciclopedia Italiana, and was an ambassador to the United Nations Food and Agriculture Organization.

Levi-Montalcini passed away on December 30, 2012, in Rome. At 103-years-old, she holds the record for longest-lived Nobel Laureate.