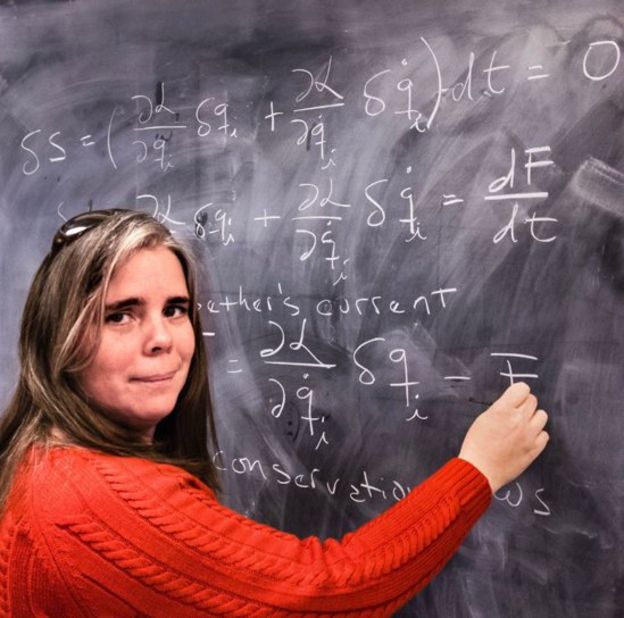 The world of High Energy Physics is currently home to some amazing women in STEM.

Dr. Gabriela González was the spokesperson for the Laser Interferometer Gravitational-Wave Observatory (LIGO) team that detected the first gravitational waves.

Dr. Fiona Harrison is a leader of the NuSTAR X-ray team, which studies everything from supernova remnants and neutron stars to supermassive black holes.

Dr. Fabiola Gianotti is the first woman to serve as Director-General of CERN, home to the largest particle accelerator in the world.

But on the topic of neutrinos, one woman in STEM takes the lead: Dr. Mayly Sánchez.

Dr. Sánchez was born in Caracas, Venezuela in June of 1972. Her passion for science began at a young age, watching episodes of the 1980’s show “Cosmos” by Carl Sagan. Though she initially wanted to study astronomy like Sagan, the neighboring field of physics drew her in instead.

She completed high school at an all-girls Catholic school before continuing on to earn her Bachelor’s in Physics from the Universidad de Los Andes in Mérida, Venezuela, in 1995. She then completed a one-year program in High Energy Physics at the Abdus Salam International Centre for Theoretical Physics in Trieste, Italy, before moving to the United States for graduate school.

During her undergraduate degree, Dr. Sánchez took an interest in the fundamental particles of physics. These particles are the basis for everything we know of, including atoms and light. While earning her Master of Science degree and Ph.D. at Tufts University in Boston, Dr. Sánchez narrowed her focus down to neutrinos—a fundamental particle with no electric charge, produced when radioactive elements decay or during nuclear reactions in stars.

After finishing her Ph.D. in 2003, Dr. Sánchez worked as a postdoctoral fellow at Harvard University for four years, during which time she joined the Main Injector Neutrino Oscillation Search (MINOS) team at Fermilab. She’s held several important positions with the MINOS collaboration, including being elected to the Executive Committee in 2011.

Dr. Sánchez took a position at the Argonne National Laboratory in Lemont, Illinois in 2007, where she continues to work today. She also holds a faculty position at Iowa State University, earning tenure in 2013. She is a part of the NOvA Neutrino Experiment, the Large-Area Picosecond Photo-Detectors Project (LAPPD) and the Deep Underground Neutrino Experiment (DUNE).

Her greatest contribution (so far) is the Accelerator Neutrino Neutron Interaction Experiment (ANNIE) at Fermilab. ANNIE’s goal is to develop new neutrino detectors and experimental techniques, as well as study how neutrinos interact with matter. Dr. Sánchez has been the co-leader on the project since 2014.

In 2012, she was awarded the Presidential Early Career Award for Scientists and Engineers—the highest honor given by the U.S. government in the early stages of a scientist’s career. President Obama presented the award “for contributions to the detection and study of neutrinos and their role in some of the most fundamental problems in physics, and for reaching out to potential women STEM majors and exciting them about opportunities in the STEM fields, in particular physics and astronomy.”

Previous articleModern art or the work of a toddler?
Next articleMulticultural Student Affairs kicks off the semester with welcome back week